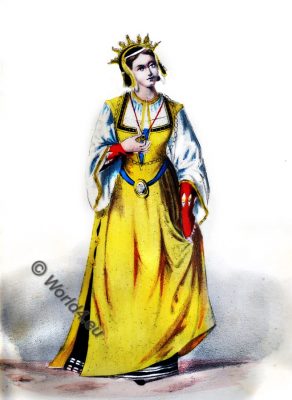 THE accompanying rich and elegant costume has been extracted from a picture by the Duc de Seyde, who died, in the flower of his years, a a victim to his passion for art. He was celebrated both as painter and engraver. At once the friend and rival of Albert Durer (1471 -1528), a noble emulation led them often to treat the same subjects, and the friendship which united them was expressed by a frequent interchange of their works.

The picture from which the present costume has been copied is one of the most precious ornaments of the Academy of Fine Arts at Pisa.

The young Duchess who is here represented wears upon her head a small white hood covered with a black bonnet, edged with gold; upon this rests a golden crown. The chemisette is white, trimmed with a light band of gold, and closed at the neck with a golden button. Through the opening of the chemisette may be seen the neck of the chemise, which is edged with lace. The under-dress is black, ornamented with pearls across the breast and over the shoulders. She wears a little medal attached to a red cord passing around the neck.

The outer robe is of golden brocade, the opening on the side of which is brought together by rich clasps, permitting the under-skirt to be seen. A golden chain is thrown about the shoulders, and hangs low in front.

The large sleeves are made of some light material of a yellowish hue, changing to a lake color, and are fastened at the shoulders by two black lacets, permitting the chemise to be seen. The under-sleeves, of red velvet, are tight, but fuller around the hands, which they partly cover; they also have slashes upon the arms, which are laced with small white lacets, allowing another white sleeve to be seen beneath. A blue girdle with red cords, clasped with a rich cameo, surrounds the waist. The shoes are black.