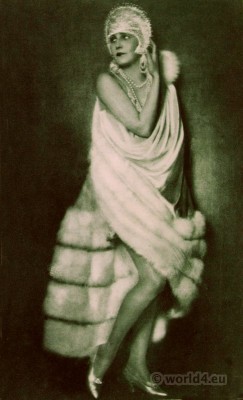 Maria Conrad, 1898-1976, in a dark red velvet cape with wide Swan trimming. Mary Conrad was a Hungarian silent film star in Austria and Germany. In 1927 she moved with her husband Alexander Corda to Hollywood. Her later years of life were spent in the vicinity of Geneva in Switzerland.