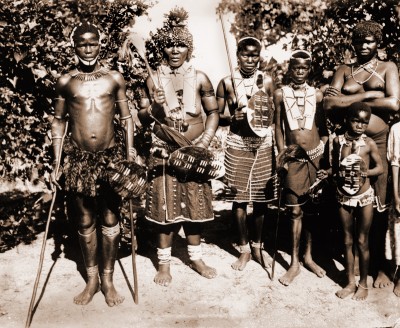 The Zulu (also amaZulu; of isiZulu izulu, means “sky”) are an African ethnic group of the Bantu with today more than eleven million people and the largest ethnic group in South Africa. They live mainly in the South African province of KwaZulu-Natal. The language of the Zulu isiZulu. In the late 17th century immigrant Bantu tribes of Nguni peoples who are originally from the area of today’s Congo, into the later Natal and displaced the indigenous San. The Zulu lived first in loose tribal groups under the rule of a respective chief (Inkosi). The Zulu were originally a sub-tribe of the Mthethwa. Their name (amaZulu, “the Zulus”) they had received about 1709 by its then chief Zulu ka Ntombhela. Around 1818, included the Zulu about 1,500 members.