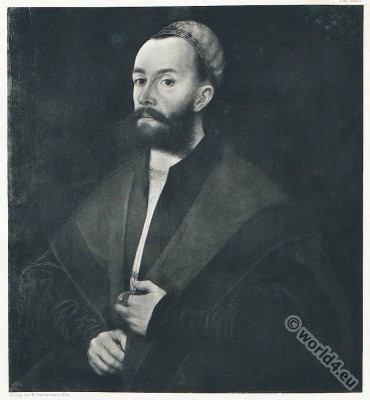 Anton Fugger of the lily. German merchant of the 16th century.

Anton Fugger of the lily (1493 – 1560) was born as the third and youngest son of Georg Fugger and his wife Regina Imhof 1493 in Augsburg, Germany. 1525 he took over the trading empire of the Fugger of his childless uncle, Jakob “the rich”, along with his brother and his cousin Raymund Hieronimus. Anton Fugger was beside Jakob Fugger the most important member of this family, which had become in a few generations the richest family of the world at that time. He extended the trade of the Fugger up to Buenos Aires, Mexico and the West Indies. He supported the Emperor Charles V and Ferdinand I and was considered as a “prince of merchants”. His business, he led it by the motto “silence stands well on!”.
The Fugger is a Swabian businessman family, which was established in the free imperial city of Augsburg since the immigration of Hans Fugger from Graben in 1367. A line of the family, the Fugger “of the Lily”, was extremely powerful in the first half of the 16th century. The name Fugger was in Europe synonymous with wealth.