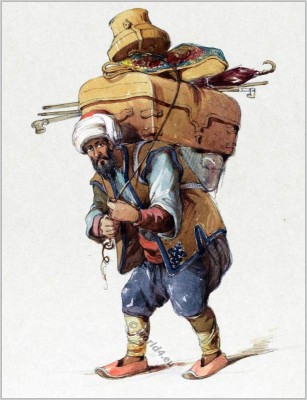 Armenian Hamal. A porter or bearer

Armenian Hamal. A porter or bearer in the Ottoman Empire.

Hammal, ḥammāl in Arabic, was the name given to the occupation of carrier. The Hammal had their own organization, a kind of early union. They carried the merchandise through the narrow streets of Constantinople between the Han. The large warehouses were referred to as Han.

From the book: Stamboul, Recollections of Eastern Life by Amedeo Preziosi. Published by Lemercier Paris 1861.