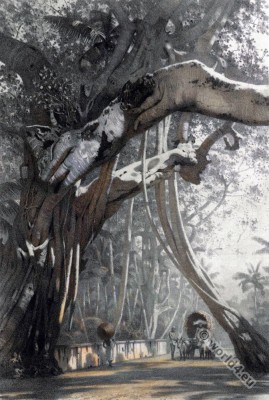 Every traveller, who has made the journey from Point de Galle to Colombo, so famous for the beauty of its scenery, cannot fail to recollect several Banyan trees, close to the road, of which the one situated in Colpetty near Colombo, is the largest. Enormous roots are coming down from its upper branches on both sides of the road, forming a kind of gateway overhead. The colour of the bark of this tree is a light grey, which contrasts in a picturesque way with the dark foliage around. In spite of its size the huge tree produces only diminutive figs, upon which nimble little squirrels are feeding.
In the rear of the picture a bullock-cart is seen slowly proceeding on its way. This primitive vehicle is still much in use by travellers in the less frequented parts of the island, although tolerable stage-coaches now run along the principal routs.

From the Book: Sketches of the inhabitants, animal life and vegetation in the lowlands and high mountains of Ceylon as well as of the submarine near the coast, taken in a diving bell, by the Baron Eugène de Ransonnet. Printed for the author by Gerold & sold by Robert Hardwicke London 192, Piccadilly. 1867.