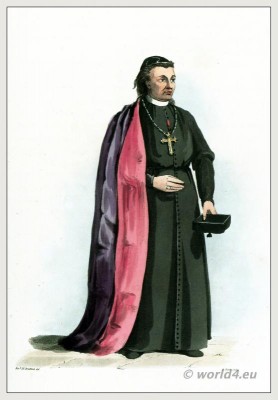 THIS sketch represents the ordinary dress of the Bishops of Portugal, and bears some general resemblance to the respectable prelate, whose name is here introduced.
A purple mantle of silk, lined with crimson, and a cross suspended from the neck, are peculiar badges of episcopal dignity: the rest of the habit, consisting of a stuff cassock, with a square calotte, is common to all orders of the regular clergy.
The Bishop of Guarda, whose urbanity of manners, and unaffected hospitality, will long be remembered by those, who, during the course of the campaign, became his guests; is a member of the Pinto da Mendoça family, one of the most distinguished in Portugal. He is between fifty and sixty years of age, and was formerly Bishop of Pinhel, a more lucrative benefice, but inferior to Guarda, in advantage of situation. The Bishop’s usual residence is at his villa, on the banks of the Mondego, around which is seen the effect of his active benevolence, and well directed charity, in the neat cottages, and industrious habits of the peasantry.
In cooperation with his elder brother, the Corregidor of the province, he manifested a zeal, and energy of character, which would do honour to the best times of Portuguese history, in promoting the good of the common cause. His nephew, (a son of the Corregidor) who is one of his chaplains, and a canon of the cathedral, lives in the palace, on the mountain; a young man of high attainments, and most engaging manners.
The diocese of Guarda formerly comprised that of Castello Branco, which was formed into a distinct See during the administration of the late Marquis Pombal, The revenue of each is between twenty and thirty thousand Crusados. The Cathedral is an extensive pile of building, coeval with the town, which was founded by King Sancho the First.

Associated with:  The Rise of Monachism. Monastic costumes history.