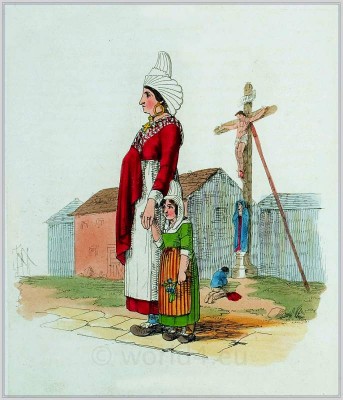 THE entry into France by Dieppe is particularly striking. Calais, where our countrymen generally land, in consequence of its former union with England, and from its having constantly been the connecting link between the two nations, has fewer peculiarities than any other French port. From these circumstances, it resembles very much an old English town, and is perhaps the worst place, at which a traveller from this island can begin his acquaintance with our rivals; for, if the change of the habits and manners of two nations is not strongly and decidedly marked, it becomes almost impossible to keep the attention so awake, as to perceive the nice gradations, by which two frontier people blend into one another. Calais, during the time of its subjection to England, was almost as much cut off from France as this country; for the desert plain or marsh on the other side, not allowing the peasantry to come within a certain distance, must have completely insulated a city, whose garrison was always afraid of some attempt at its recovery.

But Dieppe immediately presents to the traveller, as the first line of its character, the cross, seen in the print, marking to the stranger his entry upon the threshold of a nation differing in ecclesiastical as well as civil polity. When he recognizes upon the people the very dresses described in Froissart and Monstrellet, he may even imagine himself to be carried back several centuries, to the time of the Henrys and Edwards, who, with a few English knights and yeomen, swept the fields of France. The illuminations, generally published at the end of the chroniclers above mentioned, will enable him to discover the cap of Queen Isabella and the dresses of her attendant Countesses, in the various costumes of the cottage and the shop.