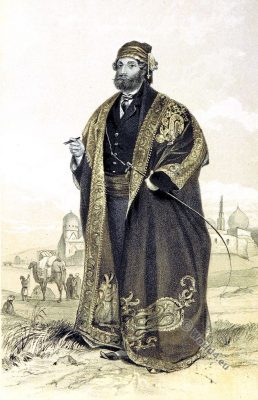 A Dragoman or Drogman (Arabic ترجمان tarǧumān, turdschuman) is a translator, interpreter or language expert guide in the Middle East, especially for the Arabic, Turkish and Persian.

The word goes back to the Semitic root rgm that already appears in Akkadian (as targumannu) and in Aramaic (as targemana). All these words mean translator. Already in the 6th century BC a special professional group has been set up in Egypt, which consisted particularly from Greeks, who had to take care of that also mostly Greek tourists. During the Middle Ages these interpreters assisted mainly Christian pilgrims. This brought the word to Europe, where it appears in Middle English (as Dragman), in Old French (as drugeman), in Medieval Latin (as dragumannus) and in the Middle Greek (as dragoumanos).
In the 16th century the term was extended to the whole Ottoman Empire. It were mainly Greeks, who took over this work and interpreting between European languages on the one hand and the Arab, Turkish and Persian language on the other. After the diplomatic recognition of the Ottoman Empire, they were the ambassadors who resided in Istanbul, and the consuls, who were based in Alexandria and Cairo, the diplomatic and consular work they had done previously, as of. In the 19th century, this term, Dragoman, was used to refer to an interpreter specifically for the traffic between the state authorities and the embassies and consulates in the East.

The following agreement has been entered into between Thomas Tobin and Vincenzo Belluti, Dragoman of Malta:
Clause I.— Vincenzo Belluti to accompany Thomas Tobin as guide and interpreter, cook, and general servant, in their Tour up the Nil, through Egypt, across the Long Desert to Mount Sinai, to Gaza, to Jaffa, to Jerusalem; from thence to Jericho, the Jordan, the Dead Sea, Mar Saba, the Pools of Solomon, Bethlehem, back to Jerusalem; from thence to Nazareth and Tiberias; to Damascus, Palmyra, Baalbec, and by Cedars of Lebanon to Beirut; thence to Smyrna, to Constantinople and Turkey, to Greece and the Ionian Isles, to Malta, and to any other places the said Thomas Tobin may wish to go to. The route to be taken, the time, place, and duration of halts and stoppages, to be entirely under the direction of said Thomas Tebin.
Clause II.— The said Vincenzo Belluti is to provide food and lodging— both as good as can be procured— and a sufficient number of camels, horses, and mules; to travel with the greatest possible despatch; also water carnage when necessary; tents and bedding, and every thing required for the journey.
Clause III.— Vincenzo Belluti is to pay ad expenses of this journey of any kind whatever, and is to provide guards when necessary— all backsheesh or tribute of every kind is to be paid by him; excepting that in the case of said Thomas Tobin visiting Palmyra, the Sheikh of the Palmyra Arabs is to be paid by him, the said Thomas Tobin.
Clause IV.— It is agreed between the said Thomas Tobin and Vincenzo Belluti that this contract shall remain in force and effect for four months from this date, provided said Thomas Tobin be satisfied.

Source: Shadows of the East; or, slight sketches of scenery, persons and customs, from observations during a tour in 1853 and 1854, in Egypt, Palestine, Syria, Turkey, and Greece, by Lady Catherine Tobin.