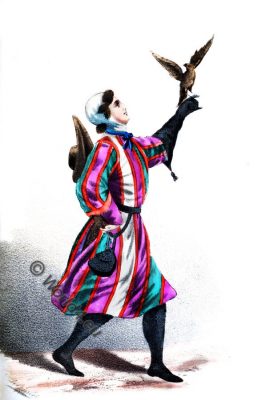 THE chase was, of all others, the amusement for which the northern nations of Europe had the strongest attachment, and which, together with the right of wearing the sword, constituted their dearest privilege. Frederic II, Emperor of Germany (1194 – 1250), himself composed a treatise upon the nature of birds, and the care they required. In this treatise the modes of raising birds of prey, such as the sparrow-hawk and the falcon, are explainedvin full.

This costume is taken from a precious manuscript preserved in the Library of the Vatican. It would appear that the livery of this falconer was common to all those employed in the imperial chase. The white bonnet is furnished with red cords. Bands, alternately violet, white and green, cross the coat, all of which are embroidered with red.
The coat is open from the girdle down, as well as in the upper part to allow the head to pass through, but is closed over the breast by buttons. The under-sleeves are blue, with black cords. The hose are brown. The glove of the hand upon which the falcon is borne is gray. The violet hat, which hangs’ over the shoulders, is held by a red cord. The belt or girdle, which carries a green bag, is black. He holds a bird’s wing, decked with a piece of scarlet ribbon, as an emblem of his employment.