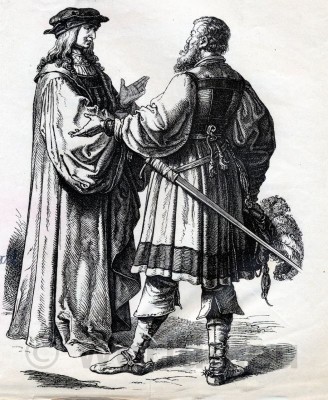 German Magistrate and Knight in 1540

Fashion in Germany during the Reformation period. Late Renaissance clothing. First third of the 16th century

Among men, the beard is in fashion. To a hair cut called the Kolbe. The hair was worn half long, straight cut on all sides and combed evenly. The beard was in the same kind of cut on the chin straight.
The head is covered by the flat cap, in various shapes and sizes. Material was usually embroidered velvet, adorned with feathers, or as a cover for women, sometimes embroidered with precious pearls. This headgear found then in the artistic circles of German Romanticism (19tes century), its rediscovery. Long pants up under the reach below the knee, plus a long jacket, emerged from the Renaissance camisole. The camisole was a short jacket with buttons on the front and a small collar. For women, it was laced worn over the undergarment. This led to the later corset. In today’s women’s fashion, there are still remnants of the original camisole, back in the costumes of some of today’s landscapes. Especially in the south of Germany where this tightly laced loaves are worn over the dirndl.
By the German mercenaries of the slotted fashion clothing was taken during the Thirty Years’ War. The reason, it is believed, was greater freedom of movement in combat. These were to slits in the fabric by looking under the dress shirt through. In the fashion of the 15th century, this stylistic device is then varied with different colors of the garments.
In the Middle Ages, the doublet originally a padded coat with long sleeves. This was worn under the armor. Later it became the main garment under the overcoat and accompanied the men’s fashion until well into the 17th century. In the Spanish fashion, it becomes a goose belly, only to be replaced in the 18th century by the vest.
The color range of clothing in Germany was mostly kept in yellow to red. Other countries, however, certain occupations, preferred specific colors. France preferred bright colors to predominantly white.