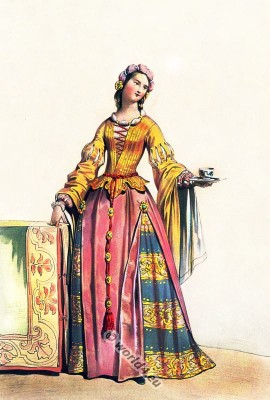 The German women’s fashion of the Renaissance was characterized by the beret. A beret is a flat, round or square head covering of wool knitting, fabric, velvet or silk lined without shade or brim. During the period of its emergence in the 15th Century, the word was borrowed from the Middle Latin barretum / birretum. Originally, the beret was a sign of the educated classes. Furthermore, the bodice was separated from the skirt and had a low small collar, called Koller or Goller. Several skirts were worn over each other, the upper – and lower skirt that reached almost to the ground. The women drew the long overcoat while walking or dancing up so the the petticoat was visible. In winter, the women wore a long coat. On the belt fell down to the hips, a Aumonière (purse) and a small knife was attached, which was of women, as worn by men.