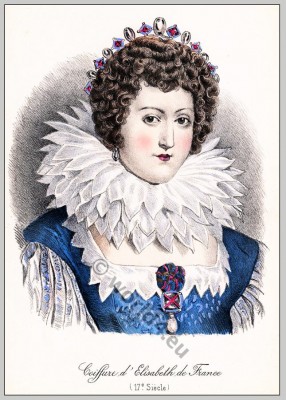 Élisabeth de Bourbon (Spanish Isabel de Borbón y Médicis; 1602-1644) was a princess of France and the first woman of the Hapsburg Philip IV 1621-1644 Queen of Spain and 1621 to 1640 queen of Portugal. Elizabeth was the eldest daughter of Henry IV. Of France and his second wife, Maria de ‘Medici. As the oldest princess, she received the traditional honorary title Madame Royale at court. In her new home Élisabeth was designated the Spanish form of her name, Isabel,. Her brother Louis XIII. should be see never again. She is considered as great patron of the Spanish literature in its golden age.