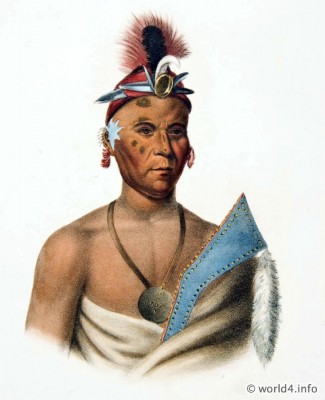 THE medicine men were formerly held in high repute among the Indians; but in some of the tribes the faith in them has lately been much shaken. Imposture, however ingenious, exercises over the human mind a precarious sway, which is constantly liable to detection; and the influence of the medicine men is based on a combination of imposture and superstition. They who practise the art are alike deceivers and deceived. To a certain extent they believe in the efficacy of their own spells; but as the fallacy of these practices becomes obvious to themselves, they are driven to ingenious contrivances to keep up the delusion, and sink into insignificance, or become artful impostors, just as they may happen to be cunning and successful, or the reverse.

There are medicine men among all the tribes. Their ordinary business is to cure diseases, and their remedies are chiefly spells, although most of them resort also, in plain cases, to their knowledge of the qualities of medicinal plants. But the latter branch of their practice is limited by the acquaintance which the Indians generally possess of simple remedies, and by their habit of using them when occasion requires. The medicine men are also dreamers, and interpreters of dreams, employing, in this part of their profession, much the same degree of intellect and cunning which are practised by the fortune-tellers who practise upon the credulity of the vulgar in more civilized communities. Sometimes they rise to a higher proficiency in their art, and assume the name of prophets, mingling in the political affairs of their tribes, and assuming rank in the councils, in virtue of their supposed favor with the gods, and prescience of events.

KEE-SHES-WA, The Sun, is a medicine man of note in the Musquakee tribe, and, so far as we can judge from appearances, is a devout believer in his science. Although in good health, and apparently a sound sleeper, he dreams very often, and very much to the purpose. He adheres firmly to all the ancient superstitions of his people, and is a stickler for the usages of his forefathers. He is especially discreet and observant of form in his smoking, and never puts the pipe into his mouth without due solemnity, nor omits any of the little proprieties which should accompany this ceremony. While he enjoys his pipe with the complacency of a true lover of the weed, no one who has witnessed the initiatory forms with which he lights it, would suspect him of smoking for mere employment. He goes through it with a seriousness which shows that he con siders it a matter of no small moment; and that, however agreeable may be the sedative effect of the tobacco, the act of inhaling the smoke is closely connected with his religious opinions. He is a sincere and honest smoker.

The reputation of Keesheswa, as a medicine man, is not so great as it was a few years ago. The more intelligent of the Sauks and Musquakees, in consequence probably of their intercourse with the whites, have become skeptical in regard to the efficacy of spells; and, except when under strong excitement, treat their medicine men with an indifference amounting almost to levity. When threatened by danger, or blinded by passion, superstition regains its sway; but as a general fact, the juggler is less esteemed than formerly.

Keesheswa is much respected as an individual. His deportment is inoffensive, and he is believed to be sincere in his own belief of the efficacy of his spells which we suppose to be true of but few of his class. At all events, it is a pleasure to see him smoke his pipe, and quite impossible to treat with levity an occupation in which he engages with a truly devout and edifying gravity of demeanor.