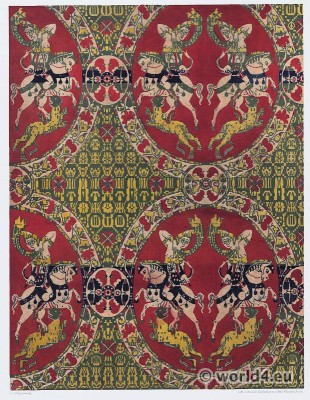 Byzantine silk fabric by the mantle of St. Fridolin 4th to 8th century.

Silk fabric multicolored stronger in body formation. Pattern opposite, orderly rows of large circles. Each of them is formed by an ornamental band, white with colored flowers and leaves.
In every circle on red background two Amazons warriors on horseback shooting backwards turned on a panther. The circles are occupied at the contact points with small rosette fields.

The spandrels between the circles contained on purple blue Basically a yellow diamond pattern with red flowers. The fabric comes from the church to Säckingen and is considered Coat of Saint Fridolin, the other residues are the same there blended and used in new garments of splendor. In every circle on a red background two Amazons are shown.

The pattern shows a transformation of a Sassanid pattern of VI-VII. Century. The fabric itself belongs to the Byzantine period of the VII.-VIII. Century.