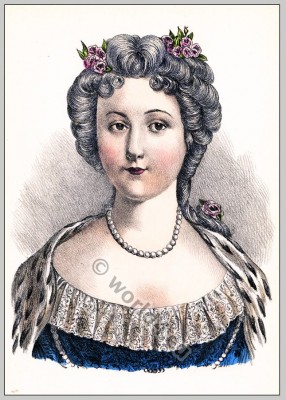 Maria Karolina Zofia Felicja Leszczyńska from the polish noble Leszczynski was by marriage to Louis XV. Queen of France. Mary was a very devout Catholic, of good health and was considered a good-natured and undemanding. She is described as not just beautiful, most handsome and as short stature but because of their dignified education, she was also quite witty. The wedding with Louis XV. was on 5 September 1725 celebrated in Fontainebleau. Many French and foreign princes attended the magnificent ceremony in which the bride wore a violet velvet, jeweled royal robe, a diadem and an eleven-meter-long train, carried by three noble ladies. Louis XV. and Maria got in the first twelve years of marriage ten children, three of whom have died in infancy.