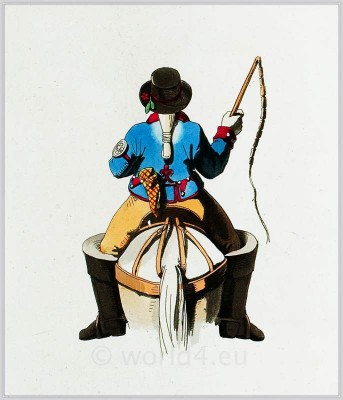 A FRENCH postillion is one of the most characteristic figures in the moving scene of France. The mixture of self-conceit, noise, tawdry, and shifts, forming his composition, constitute a true and complete emblem of his countrymen’s natural accomplishments and qualities. The first one I saw was thus set down in my journal, ,, We set off with four horses; the postillion with wood and iron, in the shape of misshapen boots up to his hips, nankeen trowsers, leather hat quaker brimmed, a long tail loaded with powder, a blue and red coat, joined to a most rascally face, bearing lips that went a few lines beyond the furthest verge of his hat, formed a caricature of itself. This dreadful smacker of his whip was a driver of four horses, from the back of one of the hindmost,” The defence the” sçavans ” of France make for these machines for the legs is, that the horse, the carriage, and the “monde,” might fail upon them, and the legs might be drawn from them as uninjured as a lady’s hand from the glove grasped by the lover at a dance.