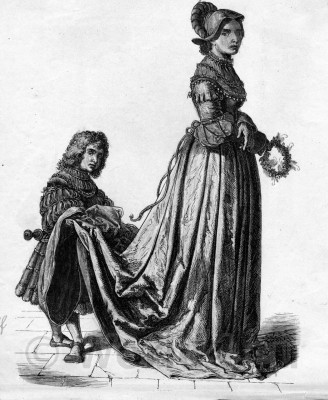 The women wore a double skirt. The upper skirt was cut in the chest round or square and had seen the shirt or an embroidered insert. To a bodice with a high neck, Koller or Goller called. The outer garment was the ornament and ended as a train. It was in walking, usually gathered. Therefore, the resulting visible petticoat was decorated. The sleeves are narrow at the top, are slotted in the lower section bulked and often lined with fur. Through the slits, the undershirt shines through. The sleeves cover half of the hands and are often subject to a surcharge. Instead of the toed shoes were the front rounded, wide shoes came in fashion, the cow mule shoes. When the woman wearing hat, a hood, called Calotte. These consisted of wool, and was often richly ornamented. There were a number of different regional caps, hoods or hair nets. 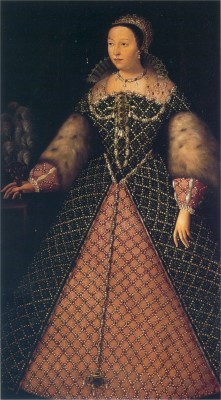 Europe was at that time still under the dominating influence of the Italian Renaissance fashion. Italy was the predominant nation in the world of fashion, because of advanced materials and manufacturers. Amalfi and Venice was the trading center for silks and fabrics. By marriage with Henry II. of France was Catherine de Medici Queen of France, strengthening the Italian influence at the court of Paris. The 16th Century as the age of the Renaissance witnessed the Reformation a fundamental cultural change. This permeated all social strata. Starting from the Czech Republic, by the reformer Jan Hus by, it spread throughout Europe. 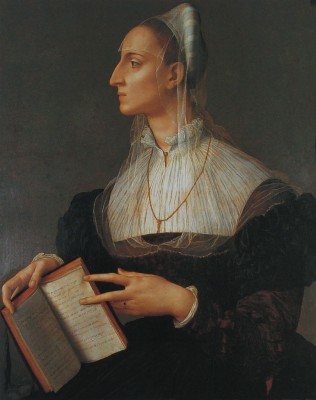 Laura Battiferri (1523–1589) was an Italian poet of the Cinquecento and wife of the sculptor and architect Bartolomeo Ammannati.

This was accompanied by a new idea which concerned the meaning of clothes. In contrast to the elegance of the earlier emphasis on body went through the Burgundian fashion, using precious materials, instead joined a letdown. Fabrics were coarser and cheaper. Although the “dignified” silhouette remained about the same. However, the costume should not constrict the body more, but rather comfort and mobility support.