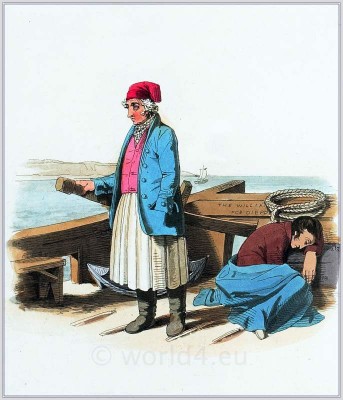 The Pilot. Costume of Dieppe, Seine-Maritime in 1821.

FRENCH PILOT conducting the packet to the harbour.
The packets from Brighton to Dieppe, when in sight of the harbour, are taken possession of by French pilots, who steer them into port, and linger the longer on the way, the more reluctance they perceive in the passengers to engage their boat. Their large petticoats, boots, and gay colored caps and earrings, mark them as of a different class to our own sailors, at the same time that they stamp them as a kind of messenger, sent to announce our welcome to a foreign clime.