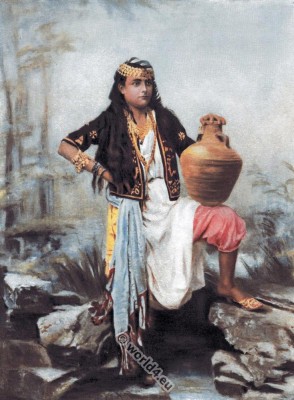 A Syrian girl in traditional dress at a spring in 1902.

The picturesque native costume is excellently displayed in this picture.

Source: Living Races of Mankind. A popular illustrated account of the customs, habits, pursuits, feasts, and ceremonies of the races of mankind throughout the world, by Henry Neville Hutchinson (1856-1927), John Walter Gregory and Richard Lydekke. Published by Hutchinson & Co. Paternoster Row, London 1902.