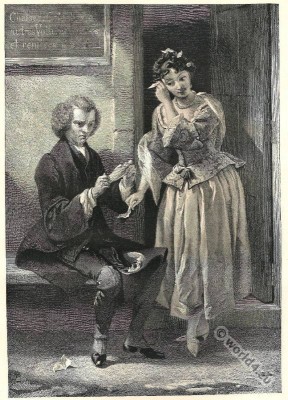 “It then presently occurred to me that I’had left my remarks in the pocket of the chaise: and that in selling my chaise I had sold my remarks along with it, to the chaise-vamper.

The wife of the chaise-vamper slipped in, as I told you, to take the papillotes from off her hair, – the toilet stands still for no man, – so she jerked off her cap, to begin with them, as she opened the door; in doing which, one of them fell upon the ground: I instantly saw it was my own writing.
O Seigneur! cried I -you have got all my remarks upon your head, Madam!

Tenez, said she; so without any idea of the nature of my suffering, she took them from her curls, and put them gravely, one by one, into my hat; one was twisted this way, – another twisted that.'”

The Life and Opinions of Tristram Shandy, Gentleman, short Tristram Shandy is a novel published from 1759 to 1767 by the English writer Laurence Sterne (1713-1768). He wrote the novel at the end of his life, between 1759 and 1766. Tristram Shandy was published in nine volumes, which were published in succession. The novel takes place between 1689 and 1766. The novel reflects both its own effect on the reader as well as the writing motivation and the situation of the writer. In it, he is also a pioneer in the spelling later designated by August Wilhelm Schlegel as romantic irony. In his book The Romantic School (written 1832/33) also highlights Heinrich Heine this novel as brilliant and innovative.