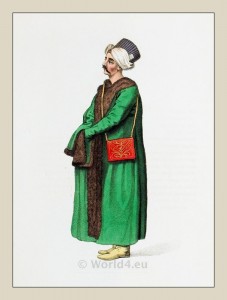 PRIVATE SECRETARY TO THE GRAND SIGNIOR.

THE excessive indolence of the Turks is well known; and where every person, who can afford it, has his secretary and other domestics, that he might not be compelled to exert himself, it is not to be supposed, that the Grand Seignior himself should be deficient in these attendants; in fact there is hardly a purpose in life, for which he has not an officer appointed. Of these officers the present one is by no means unimportant, as from the knowledge he possesses of what passes in the interior, he must of course be of experienced fidelity: and he certainly possesses the marks of secrecy and reserve.