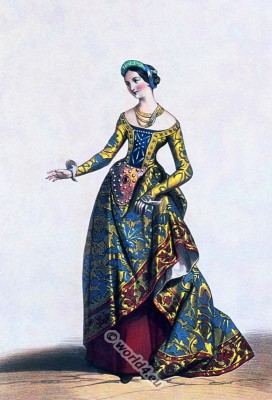 Lady in the time of Charles VII.

The lady is dressed in late medieval Burgundian fashion. The skirt and bodice are not yet connected to each other by a seam as is done in the following fashion era of the Renaissance. The Burgundian fashion is one of the most elaborate and most precious fashion eras ever. The use of high quality damask, silks and brocades was an expression of the highest luxury lifestyle in the Burgundian aristocracy. The Burgundian fashion belongs to the epoch of European Gothic.
Charles VII was from 1422-1461 King of France. With the help of Joan of Arc, he could bring about the turning point in the Hundred Years’ War. In 1453, he was finally able to expulsion of the English from France. He led France by a large fiefdom association to a nation state. He was the fifth king of the Valois line of the Capetian dynasty. He also founded the era of the so-called Loire kings.