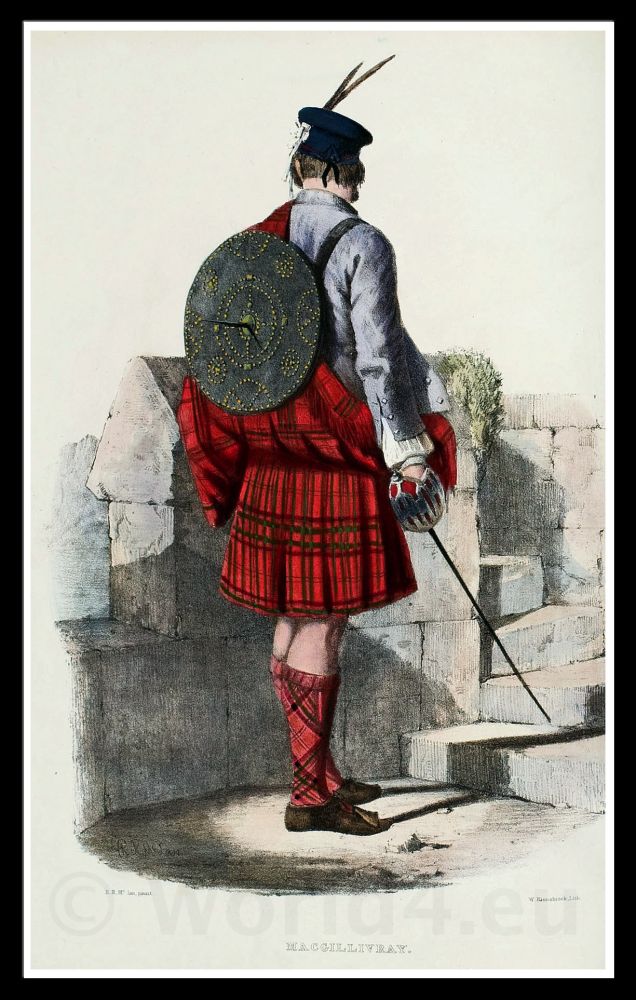 The Clans of the Scottish Highlands.

It is said that, about 1263 one Gabrei placed himself under the protection of the Mac Intosh, and was progenitor of the clan Gillivray. It could not, however, be from this person that the patronymic is derived. Mac Gillivray, the Mac Gilli-bhreac of Gaelic orthography, signifies the sons of the freckled lad, and is a name of’ considerable importance is different parts of the Highlands.

The principal branch has long resided in Inverness-shire, and the chief was designated, from his property, Duu-mac-glas, the fort of the grey man’s son. When Lady Mac Intosh raised her clansmen in the cause of Prince Charles, he was made colonel, and it was his battalion which made that furious attack at Culloden, that almost annihilated the left wing of the Duke of Cumberland’s army, but east the life of Mac Gillivray, who fell, with four officers of his clan.

This brave soldier encountered the commander of Barrel’s regiment and struck off some of the English colonel’s fingers with his broad-sword. After the conflict was over, Mac Gillivray was stripped, and his waistcoat, doubtless handsomely embroidered, was appropriated by a private soldier. Walking along the streets of Inverness in this garment, he was met by the colonel, who indignantly stopped the man, and ordered him immediately to take it off. “I recognise that waistcoat,” said the generous warrior; ” I met on the field of battle the brave man who wore it, and it shall not now be thus degrader”.

It does not appear, however, to have been long retained by the colonel, for it was afterwards exposed for sale in the window of a tailor in Inverness. Mac Gillivray’s immediate followers were abult eighty. He had abjured King James in May, 1745, and took lip arms in August following, which, it is absurdly alleged, he did to procure for lain Shah, merchant in Inverness, and “a prime councillor of Lady Mac Intosh, the post of collector of the land tax,” under the restored dynasty!

Note:  Scotland. Costumes of the mountain dwellers. The woman.

Mac Gillivrays in the island of Mull

There is a very respectable branch of the Mac Gillivrays in the island of Mull, designated from the residence of the Ceann-tigh, or head of the house, as of Beinn-na-gall, the mountain of the stranger. They are probably descended from those in Lochaber and Morvern, who were dispersed on the discomfiture of Somerled by Alexander II., and seem to have been otherwise called Mac Aonghais, or Mac Innes; but it is a verbal perversion to make the name synonymous with Mac Gilli-Brid, the son of St. Bridget’s follower.

The above Mr. Martin Mac Gillivray, who lived about 1640, retained the practice of carrying a sword: and, calling on Allan, second son of Mac Lean of Lochbuie, for his proportion of stipend, he revised to pay, asking the parson with a sneer, if he meant to, enforce his demand by the sword? “Rather than lose what is my due,” replied the sturdy clergyman, “I do mean to use my weapon.” “Well,” says Mac Lean, “I have no objection to take a turn with you.” ‘”Ta mi deonach a chall ma chuireas tu mo dhruim ri ball:” “I am content, then, to lose if you arc able to put my back to the wall,” was the prompt return of Mac Gillivray; and he quickly brought his antagonist to the ground, who gave in, and paid the amount, with the observation that he liked well to see a man who could maintain his living by the sword.

From an intelligent gentleman, in Mull, of this name, we were told the following anecdote. The Laird of Beinn-na.l-gall fought in the battle of Sherramuir, 1715, and, happening to stumble, a gentleman standing near, believing he was shot, exclaimed, with great concern, “God preserve you, Mac Gillivray!” “God preserve yourself,” was the ready reply, “have, at present, no need of his aid.”

The COAT ARMOR is party per pale arg. and az.; in the dexter chief a hund fesswise Coupée. holding a dagger in pale; in the sinister a cross crosslet fitchee arg. Crest, a cat secant, proper. Supporters, two armed Highlanders, with steel caps, tartan jackets, and feilebeags, and bearing targets on their exterior arms, all proper. Motto, Touch not the cat bot (without) a glove.

The BADGE, as a branch of Clan Chattan, is Lus nam braoileag (vaccinium vitis idea), red whortle berry. The rallying cry was Loch moy, that of the Mac Intoshes, but we have heard it said that their own cath-ghairm was Dunma’glas. The position of this figure is intended to display the Breacan an fheile, or belted plaid, the original dress, so called from being fastened around the body by a belt. This ample robe, which contained ten or twelve square yards, was peculiarly useful, answering the purpose of a garment by day, a comfortable cloak in bad weather, and bedding by night; for by unfastening the belt the whole was disengaged.

The target is from the collection of Colonel Mac Lean, of Coll. preserved at his scat, Druim Fhinn, Fingal’s Ridge, in Mull. The sword is the usual claymore, with plain, strong, steel baskethilt. The jacket is dyed of a light shade with the nativ crotal, which produces a color of which the Highlanders are very fond. The hose are ca ‘da’, a thick stuff of the same pattern as the plaid, not knit but sewed, similar to those still worn by the Highland regiments. The broges are of deer’s skin, the hairy side outwards, of the common form; the bonnet, also, is of the shape at one period preyailing throughout the Highlands, and the white cockade, worn by the adherents of the Stuarts, is conspicuous on the left side.