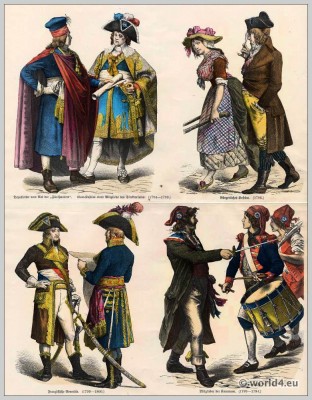 Last third of the 18th century.
Top row left to right: Deputy by the Council of Five Hundred. Gala costume of a member of the Directoire Revolution Board from 1794 to 1799. Right: Civil French Costumes, 1796.
Bottom row left to right: French generals 1799 to1800. Right: Members of the Paris Commune with Jacobin hats 1793 to 1794.

Related: On the history of costumes. Münchener Bilderbogen. Edited by Braun and Schneider 1860.

Read more: The Days of the Directoire. Costumes under the French Revolution.