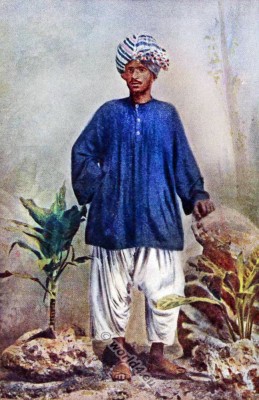 A man from Kabul.

The accompanying picture represents a native of Kabul, and the dress is typical of that worn by most Afghans. Those who visit the larger Indian towns are usually horse-dealers or their attendants, and may be distinguished by their loose baggy trousers and smocks. They are a hardy race of men, and usually excellent horsemen, although their movements, like those of most Asiatics, are slow and heavy. It was not without very considerable difficulty that one of their number was persuaded to be photographed. Of an exceedingly suspicious disposition, each enquired the reason of a portrait being needed, and, when informed that it was for the purpose of showing, by the aid of a picture, how an Afghan was dressed, they one and all declared that that could not be the truth, as everybody knew that already!

Most of the Kabulis who are temporarily staying in Bombay are known to each other, and since they soon discovered that applications for sittings had been made to several of their number, they were much exercised in their minds to decide upon what was likely to be the real reason for this unusual demand. After discussing the subject for some weeks among themselves, they eventually came to the conclusion that the photograph was required for the purpose of sending it to Her Majesty, who would, upon receiving it, order the immediate execution of the sitter! A clearer instance of the proverb concerning a “guilty conscience” could surely not be found. By dint of repeated assurances to the contrary however, and of solemn promises to hold him blameless whatever might accrue, one of the number at last allowed himself to be driven to the studio, and by dint of pressure brought to bear, in the shape of promised baksheesh, he was finally induced to face the camera.