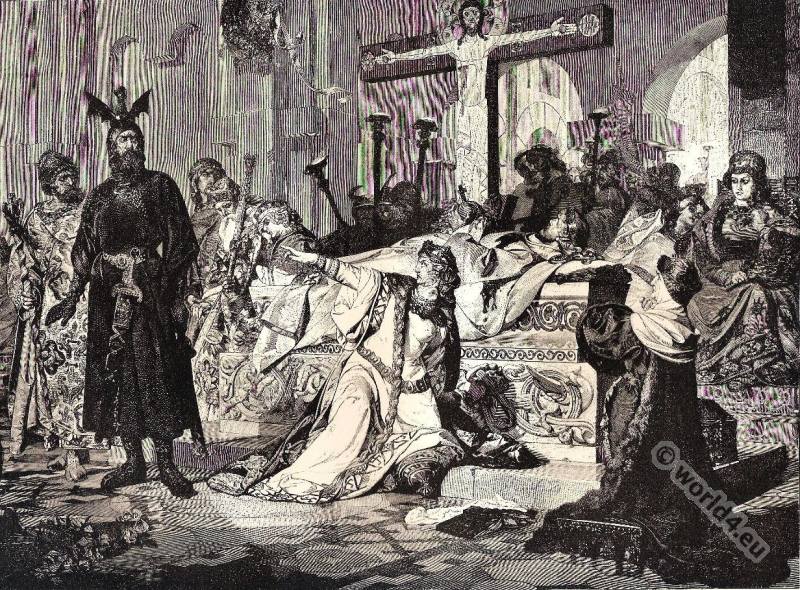 KRIEMHILD, daughter of Dancrat and sister of Gunther, King of Burgundy.
She first married Siegfried, King of the Netherlanders, who was murdered by Hagan. Thirteen years afterwards, she married Etzel (Attila), King of the Huns. Sometime after her marriage, she invited Gunther, Hagan and others to visit her, and Hagan slew Etzel’s young son. Kriemhild now became a perfect fury and cut off the heads of both Gunther and Hagan with her own hand, but was herself slain by Hildebrand. Till the death of Siegfried, Kriemhild was gentle, modest and lovable, but afterwards she became vindictive, bold and hateful.

“Let me have one small pleasure ‘mid pains so manifold,
The stately head of Siegfried I tvould once more behold.’
She begged so long, so wailful, that less they could not do
Than force the coffin open and give the corpse to view.

“So thither they led the lady, where lay the clay-cold dead,
With her five snowy fingers she raised his stately head,
And kissed him lifeless lying; long bending there she stood;
Her fair eyes for anguish wept o’er him tears of blood.

“How woeful was their parting! borne was she thence away,
Walk she could no longer, insensible she lay
Through bitterness of sorrow, so lovely and so still,
As if Death would have smitten, yet wanted head to kill.”

The Nibelungenlied is a medieval epic. The text version we know it came at the beginning of the 13th century and was therefore written in Middle High German; the substance is much older. The Nibelungenlied gained the status of a national epic of the Germans, with Siegfried the Dragon Slayer as a national hero in the 19th century.

The Nibelungenlied is the most important late medieval German implementation of the Nibelung saga, whose origins date back to the heroic age of the Germanic Migration Period. A historic core or starting point for the forecast is the destruction of the Burgundian kingdom in the space of Worms in Late Antiquity (around 436) by the Roman army master Aetius with the help of Hun auxiliaries.