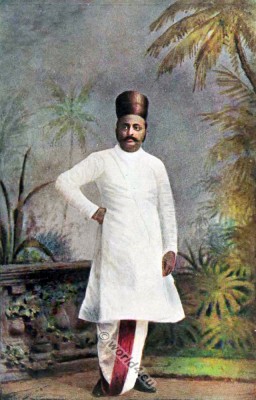 The Bania. A merchant from Mumbai.

This word itself is not significant of a particular caste, as is the case with the word Brahman, but means a trader, or merchant, being more particularly applied to dealers in grain; and as the European game of “cornering the market” is not unknown, there are very many of these gentry whose wealth is considerable.
In India, the son nearly always follows the profession or business of his father. It consequently follows that we have the Bania class, the bootmaker class, the tailors, the carpenters, the blacksmiths and the ghariwallahs or coachmen – all forming separate classes or castes to themselves. Taken as a whole, the Banias are perhaps the least educated of any of the middle class natives of the present day. Not that this implies that they are lacking in business capacity-rather the reverse-for while youths of many other castes are spending years at school, and afterwards at college, passing examinations and taking degrees, the Bania young man is busily engaged in studying the tricks of his business, and, be it said, they are manifold. It is therefore not surprising to find that the Bania ranks among the richest in the community, especially when it is remembered that his wants are few and his habits simple. He may have a large house and many servants, with a rubber-tyred carriage drawn by a pair of high-stepping Arab steeds. On certain state occasions, too, he can-and does-adorn his person with purple and fine linen. But when enjoying the privacy of his own house, he often wears a cloth around his loins, and nothing besides.
He has a large apartment, gaudily furnished, which is reserved for state occasions, but his custom is usually to occupy a small room in the rear of the house, where he squats on the ground and eats his rice, as from time immemorial, with his fingers.
The Bania costume varies according to locality, that shown in the present picture representing a resident in Bombay.