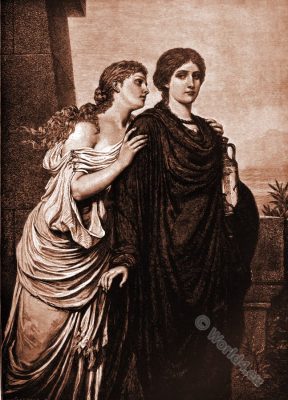 ANTIGONE (ancient Greek Ἀντιγόνη), daughter of Oedipus and Jocasta (in Homer’s work, Iokaste is called Epikaste.) was a noble Greek maiden, with a heroic attachment to her father and brothers. When Oedipus had blinded himself and was obliged to quit Thebes, Antigone accompanied him and remained with him till his death, when she returned to Thebes.

Creon, the king, had forbidden anyone to bury Polynices, her brother who had been slain by his elder brother in battle; but Antigone, in defiance of the prohibition, buried the dead body, and Creon shut her up in a vault under ground, where she killed herself. When her disobedience was discovered, her sister Ismene insisted upon declaring herself Antigone’s equal in guilt, and upon sharing her punishment.

The artist has marked the difference between the courageous, almost severe nature of Antigone, and the clinging, gentler character of Ismene, who could not brave Creon’s anger to give her brother burial, but would accuse herself of the crime and die with her sister, sooner than live without her. Antigone’s heroism has formed the basis of one of Sophocles’ finest tragedies and of a tradegy by Vittorio Alfieri (1749-1803).