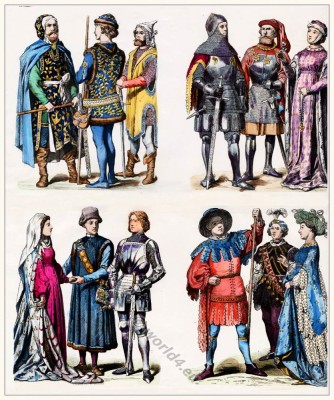 German fashion in the XV. century

German fashion in the 15th century.

Men’s dress at the beginning of the fifteenth century was in all essentials similar to that which they had worn at the end of the previous century, but the character of the separate items had undergone considerable change owing to incongruous combinations and degenerations in shape.

An Austrian chronicler of this period says: ” Every one dressed as he pleased. Some wore coats made of two kinds of material. Some had the left sleeve much wider than the right — wider even than the length of the whole coat — while others wore sleeves of equal width. 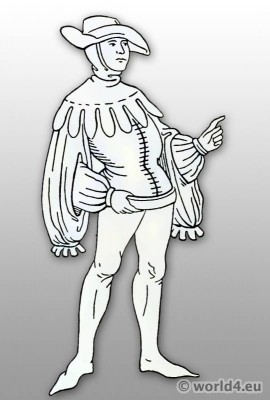 Fig. 218. German Men`s dress of the first half of the fifteenth century

Some again embroidered the left sleeve in various ways, with ribbons of all colors or with silver bugles threaded on silk strings. Some wore on the breast a kerchief of various colors embroidered with letters in silver and silk. Still others wore pictures on the left breast. Some had their clothes made so long that they could not dress or undress without assistance, or without undoing a multitude of small buttons dispersed all over the sleeve, the breast, and the abdomen.

Some added to their clothes hems of cloth of a different color; others replaced these hems by numerous points and scallops. Every one wore hoods, until the former headdress of men had disappeared. Cloaks were hardly long enough to reach the hips.” 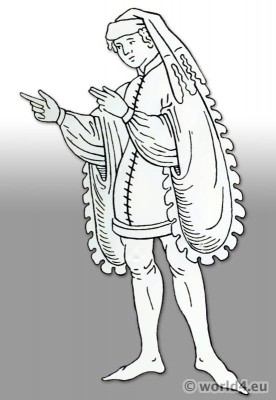 In spite of all these differences the cut of the chief garment, the Wams (now called Scheckenrock, or Schecke, after the English ‘jacket’), remained essentially as it had been. The sleeves exhibited some peculiarities of shape. They were now more or less wide, and took the form of sack sleeves (Figs. 216). These were either actual sacks closed at the end, or were left open and loosely tied, but provided with an opening higher up to let the arms through (Fig. 218). In the former case the sleeves were made in two parts, the only difference between them being that the lower part was cut away at the top while the other was not. In the other case—i.e., when the sack sleeves were tied at the foot—they were made in one piece, cut quite straight, and sewn up back or front. If the arms were to be completely covered these sack sleeves had to be supplemented by a second pair, which were either attached to the jacket with the first pair or belonged to an underjacket. There were also jackets with sleeves equally wide all the way down. These wide sleeves were usually tied with a ribbon at the wrist so as to form a sort of ruffle. Sleeves were often so long that they extended far beyond the hand; if the wearer wished to use his hands freely he had to turn the sleeves back. These elongations were called Pieschen.

The Wams, or doublet, underwent other changes. By being considerably shortened it was transformed into a jacket. This usually had a small erect collar and a slit at the back or at both sides from the bottom hem to the hips. The back piece was sometimes made wider than necessary, and then gathered as tightly as possible in two pleats at the waist. The front was also cut very wide, but instead of being gathered in pleats it was heavily padded. 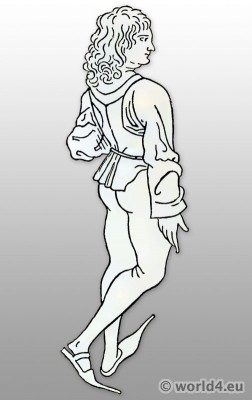 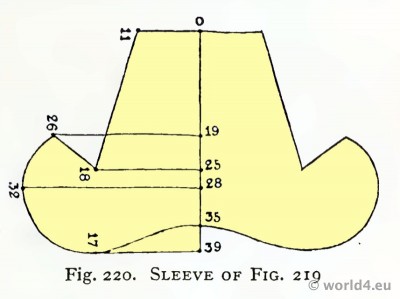 Another over-dress was the Tappert, also called Trappers or Trapphart. It had been evolved from a garment that was closed all round, but it had sleeves, often edged with fur. In course of time the Tappert assumed various forms. A very long and wide style of it, with sleeves, was a dress for high occasions, while a shorter type, equipped with a hood and open at the sides, served as an overall. The Tappert ousted the cloak almost completely. Various other articles of dress besides the Tappert were in general use, but these were less for protection than for ornament. It was toward the end of the century that they came into use. Some were short and others were long, but all were fairly wide. 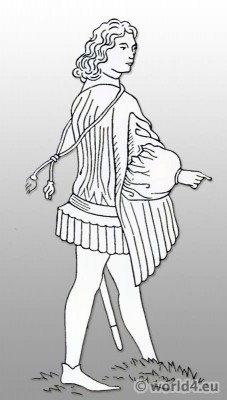 Fig. 221. German Men`s dress, second half of the fifteenth century.

One was a kind of short tunic (Fig. 221) with low neck and long sleeves open on the upper side for almost their whole length. This tunic was open from the neck downward, and was fastened by means of buttons. The edge was stiffened and hung down like a series of tubes set closely side by side, the pleated tunic being stretched over these. This peculiar style of edge, closed all round, was obtained as follows. The bottom edge of the tunic (which was tighter at the top than lower down, though the front and back pieces were cut alike) was cut into peaks (Fig. 222); then a strip was sewn on whose upper edge was cut into the same number of peaks as there were in the tunic. These peaked edges were fitted into each other. 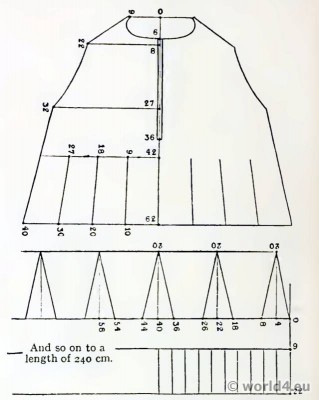 The stiffening of the edge was done thus: out of parchment or stiff leather, casings were made, 3-4 cm. in diameter, and 15-18 cm. long. A sufficient number of these were taken to give a total diameter equal to half the width of the edge that was to be stiffened. These casings, or tubes, were cut longitudinally into halves and sewn close together into the bottom band of the tunic trimming. The work was begun in the middle of the back. A deep pleat was made, and sewn down between two tubes at top and bottom. Then another tube was put at each side; the material was drawn taut over the first tube and sewn again to these and the next tubes at top and bottom. The material was then pulled over the second pair of tubes, and the third pair put in place, the material again being sewn between the tubes. And so on. It was of great importance that the tubes should hang perpendicularly and be quite close together. Finally, this band was strengthened by an inside lining of coarse linen, which was stitched down between each pair of tubes. In the sleeves of this short tunic the seam was, as usual, on the under-side. It was hidden by the lining, because the upper side of the sleeve was slashed from near the shoulder.

Another form of over-garment was close-fitting at the top, but was widened from the waist down by gores to such an extent that large folds were produced at the foot. This was a short coat, with short sleeves; it was open in front from neck to waist. The breast was padded. It is worthy of notice that the sleeve-seam was on the under-side and that the sleeve was pleated when it was sewn in at the sleeve-hole. The lower end of the sleeve was made to suit the taste of the wearer.
There was still another kind of tunic, reaching to the knee, with the upper part somewhat close-fitting. The width at the foot was considerable, and a girdle was always worn with it. In some cases it could be buttoned in front; in others it was cut in a low V-shape down to the girdle, having a turn-over collar broad at the top and narrowing to a point. The sleeves were either long and wide or open and pendent. These tunics were made of rich material, sometimes of different colors, and were often trimmed with furor a wide border of gold. Some were quite plain. 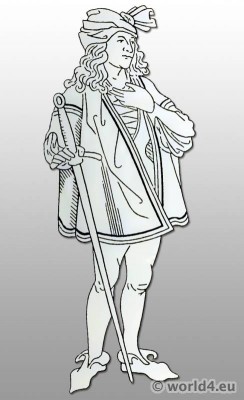 Fig. 223. German Men`s dress, second half of the fifteenth century

In addition to these tunics there was also a kind of plaid, cut almost like a cloak, with very short sleeves, or merely with armholes (Figs. 223). 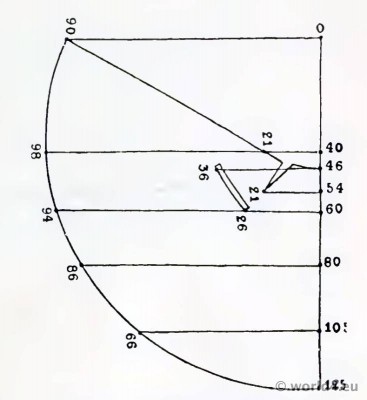 Pattern for outer garment in Fig 223

Toward the end of the century the upper classes were wearing the long, wide robe which was at the time fashionable in France. It was open in front, and a girdle was worn with it above the waist. This robe was usually made of finest damask, and had wide (or very tight) sleeves slashed at the elbows, and very often a fur collar, although some men wore it without the collar.

Fig. 225. German Men`s dress, second half of the fifteenth century.

The cloak became again fashionable in the second half of the fifteenth century, but its shape had entirely changed. The large semicircular cape was now worn only on great occasions. The usual cloak of this period was small. It was made of cloth, velvet, or silk, thin felt, or even of fine, soft leather. It was rarely long enough to reach to the hips. Its shape was still semicircular, but it was much shorter than it had formerly been. It was usually shaped so as to lie closely on the left shoulder and to fasten on the right shoulder with strings or a small clasp. There was another form of cloak, shaped like part of a sector. It was held in place by a cord across the breast. It covered only the back. (See Figs. 225 and 226.) 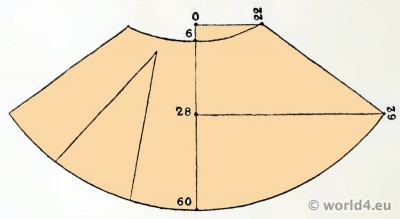 There were still other styles of cloak. They were worn loosely over the shoulders, and required no fastening, because they retained their position by their weight, which fell forward. They were mostly very wide, but much shorter at the back than at the corners. Hose and breeches presented a motley appearance owing to the variegated colors and designs of the trimmings. Toward the end of the century the Germans began to wear the ‘shorts’ that were already in general use in France and England. They were put on over the long hose. 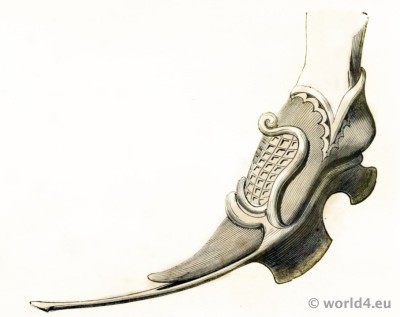 Footwear had not greatly changed, but the top-boots were now considerably longer. The legs of these boots were somewhat wide, and were slashed in front. Toward the end of the century the pointed toes gradually became shorter, and finally disappeared. The shoes were now round at the toes, and about 1492 they began to be very broad. In 1480 the pointed shoes had attained such a length that special wooden under-shoes had to be worn in order to preserve the shape and maintain the fit of the long shoes while on the foot. *
The most important item of headdress was now the hat. It was made in all shapes and colours, and of various materials, including fur. Caps of different kinds were also worn, and colored bandeaus were still fashionable. The hair was allowed to grow long, and was curled. The beard was shaved.

* A detailed description of the history of Medieval shoemaking is available on the website of I. Marc Carlson.

A HISTORY OF COSTUME BY CARL KOHLER EDITED AND AUGMENTED BY EMMA VON SICHART. NEW YORK 1913