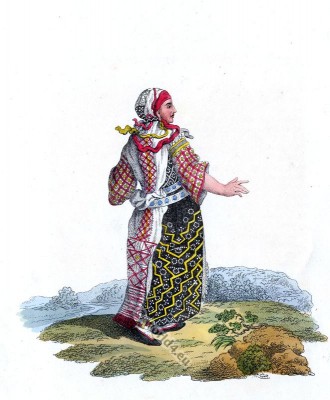 Back Figure of a Woman of Finland in her Holiday Dress.

Back of a Finland woman in holiday dress.

The Finns call themselves Suomi, which signifies marshy. The country inhabited by this nation extends to the north of the Finland, and to the west of the Bothnian Bay (Finnish: Perämeri) at the Baltic Sea. The ground is stony, and very uneven; in many parts totally barren, and every where rewarding but sparingly the labours of the husbandman. The families of their ancient chiefs are extinct, or at least forgotten. They have no longer a nobility: a degree of rank is however kept up amongst them. The inhabitant of the towns is considered superior to the peasant, and the peasant acknowledges himself inferior to the towns-man.
Their towns are much dispersed, and even the houses are situated at a considerable distance from each other; the progress of knowledge and industry is consequently slow. In return for their hard labour, the earth barely produces them a subsistence. Of all the spots inhabited by this people, the marshy Carelia is the most unfruitful. Rye and oats are the only grain it produces. In the best seasons, their harvests are never superabundant. To avoid the famine that threatens them, they are forced to mix with their meal and bran the bark of the fir tree pounded, wild roots dryed, and whatever they can meet with, capable of supporting their wretched existence.