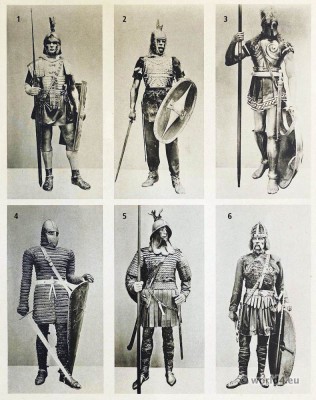 Life-size warrior figures in full costume and equipment using individual original pieces. The reconstructions of the Gimbelschen weapons collection (Karl Gimbel) appeared in 1902 with illustrations and descriptions at Mittler and Son Berlin.
Head and limbs of the figures are carved from wood, movable part, each piece is up to them removable. The main purpose is to show the different armor types.

Source: Karl Gimbel: The Reconstruction of the Gimbel’s collection of weapons, Berlin 1902.

Go here for the full gallery: Knights and soldiers from antiquity to modern times. (German)