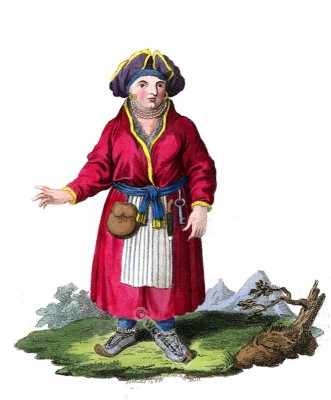 A Woman of Lapland.

A Woman of Lapland in traditional dress.

THE Lapland Women are short, but often well formed, obliging, modest, and extremely irritable. ‘Their trowsers, shoes, doublets and close coats, are similar to those worn by the men; but the girdle, to which they append their instruments for smoking, is generally embroidered with brass wire. The cape of’ their coats reaches higher than that of the men. Besides these, they wear neck-handkerchiefs, and small aprons made of Russia linen painted, rings on their fingers and also in their ears; to the latter they some-times hang two or three rows of silver chains. Sometimes they wear caps plaited like turbans, and sometimes they arc made to fit close to the head: they are always ornamented with brass wire, or strips of cloth of different colours.
The women are employed in making fishing nets, drying fish and meat, milking the rein deer, making cheese, and tanning skins. They prepare the sinews of the deer for thread, and with the horns perforated they draw wire, which is at first round, but is afterwards flattened. They embroider their clothes (which they make themselves) with wire of tin, silver, or counterfeited gold, and sometimes with wool, which they are able to die of all colours.
The marriage of the children depends on the caprice of the parents, and interest alone is the passion by which they are actuated. On this account it is very common for the most forbidding objects to meet with a good offer. A young man is not permitted to marry until he is able to kill a rein deer.
The wedding takes place at the bride’s house; she is decorated in her finest apparel, and appears before her guests with her head uncovered. The festival on this occasion is a species of pic-nic, to which each of the visitors contributes something to eat or drink. During the first year the new married couple live at the wife’s relations; at the expiration of that period, they take a koie or hut to themselves.