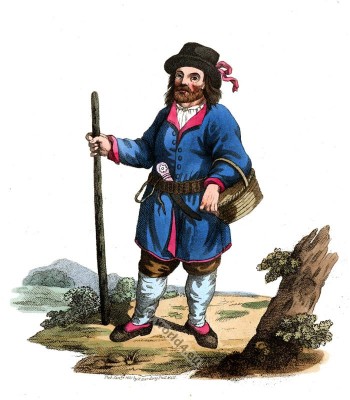 A Peasant of Finland.

A Peasant of Finland in traditional dress.

IN his exterior the inhabitant of Finland strongly resembles the Laplander; but in body and mind the former is more cultivated than the latter. They are of the common stature, and dwell in towns and villages.

The dress of the citizens, or inhabitants of the towns, varies in no respects from that of the towns of Sweden. The peasantry also dress like the Swedish peasantry. The greater part suffer the beard to grow, and others only the whiskers. Large breeches are worn, and many twist their cast-off linen round their legs in lieu of stockings. Some wear shoes made of skin, and others of the bark of trees matted together. They also wear a shirt, which tucks into the breeches, a doublet, and a short coat which buttons. A skin girdle goes round the waist, to which are hung a large knife, keys, and the instruments for lighting a fire. The hair is worn straight, and is covered with a hat similar to those worn by the Dutch.

Their clothes are generally made of the stout Walmar cloth manufactured by the women ; but sometimes of a finer texture, which they purchase, and sometimes of skin or linen. In winter they commonly wear sheep and other skins.

They profess the Lutheran faith, and adopt the Christian era in their chronology. Although their idols, and the worship paid them, have long since been abolished in Finland, much superstition is, nevertheless, to be met with among the country people; these ancient opinions are perpetuated, they pass from father to son, and it is extremely difficult to eradicate them; seeing that the farms arc so dispersed, and at so great a distance from each other, that the peasantry cannot enjoy a wholesome and rational system of instruction. The following are some of their superstitious notions.

On Mondays and Fridays no person ought to look for success in any enterprise: whoever makes a noise on St. George’s day is in danger of suffering by tempest: on Christ-mas clay the cattle must not be let out of the stable: on St. Stephen’s day a coin, or piece of silver, must be thrown into the vessel out of which the horses water: on time evening of Shrove Tuesday no fire or candle must be lighted, &c.

Source: Costume of the Russian empire by Edward Harding.