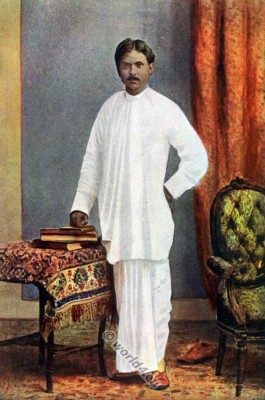 As in the case of the Marwari, the Punjabi, the Madrasi, and others, the Bengali derives his name from the province in which he is born. He wears no turban, nor does he shave any part of his head, his hair being cut short in a similar fashion to that adopted by Europeans. His shirt is also of European pattern, although the manner in which it is worn is peculiar to the East, it being regarded as the outer garment, and the tails thereof allowed to flutter in the wind.
The Bengali or, as he is more often termed, the Bengali Babu, belongs to a class who are as little distinguished for courage as any race in the world. It is not uncommon indeed for them to expatiate upon their own extreme cowardice, as if alluding to a special gift. They are consequently thought little of by all the up-country tribesmen of the North-West, many of whom are soldiers born, and consequently do not take kindly to a people who are wanting both in physical strength and moral courage.
Many curious specimens of “baboo English” might be quoted, the following being genuine samples, although it is but fair to add that many Bengalis have become keen debaters, and fluent speakers in English.
“I beg apology for intrusion in valuable precious moments, and request you to endure a little patients in reading following fully, reckoning this as it were to be my soliloquy. I am much liked for the acrimonious and prompt way I execute work. … Being much disheartened of my sterile labors, took into head that some trade is far superior to being clerk, have prelibated printing, and been employed in almost all the printing offices. Finally I was conducting the bumper work of municipality. I have had great and responsible business… to keep my books up to the mark, give daily accounts of contents of each stores, weighment and other sickening works.” This effusion concluded with the expression of a “full hope of your honor’s entire approbation and emoluments.”

Another amusing letter, written in a flowing hand, reads as follows:
„Sir,-Has the honor to inform you that the undersigned wants a Directory. Calendar Directory. Times of India that Globe Directory. 2. Please inform its prices of each copy of the I 89i, or of the 1896. As the undersigned are wants for necessarys of his firm. 4. Request that I had been missed your exact addresses. Please excuse it as in which all the residents, Civillion, and Military Troops & co. and co. are written in the derictery. 5. Hope your kind and affectionate favour will be so good eno. Answer this firm the exact price of each copy, that what will be charge of each; Reply by return of Mall. 6. by receiving an early reply we will be very much thankful & gratitude. 7. Also send your price in full of your Directory. 8. Kindly answer soon.
Your most sincerely i.e. Ram Lochun Ghose & Co.
P.S.~Please send soon reply.”