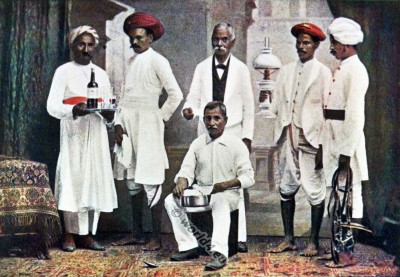 It has been said, with some amount of truth, that natives of India make excellent servants, but one of the qualifying conditions lies in the necessity of knowing how to manage them. It is requisite that the exact amount of license be allowed them, and no more, for, if not permitted to exercise their accustomed privileges in the matter of perquisites, in connection with the bazaar purchases and otherwise, they feel deeply aggrieved, and, giving as a reason the alleged sickness of their maternal uncle, which necessitates their immediate departure for their “country,” they are seen no more. A very careful line, however, must always be drawn, and having allowed a more or less wide margin, for dastoori, it is inadvisable to submit to use plain English to further extortion and robbery. Honesty is to some extent a question of degree, and the point of view of the Asiatic differs materially from that of the European for while a man always robs you over the monthly bazaar account to the utmost limit of his ability, he may be above suspicion but this is not to be regarded as by any means a certainty in the matter of valuables or money entrusted to his care.

The number of servants in various households naturally differs to a great extent, but the smallest bachelor establishments usually find it necessary to employ at least five persons, of which the butler, or ” bootliar ” as the native has it, is the chief. It is he whose proud privilege it is to go each morning to the bazaar, and buy the necessary food for the day’s consumption; he it is who, provided you will stand it, imports into your larder the rejected scrag ends of the meat market, and mulcts you for the same at a rate in excess of that charged for the best joints. Should you object to this procedure, he at once explains that it is purely owing to his intense desire to study your pocket that he does not bring the best quality, upon the excessive price of which he then proceeds to expatiate. As it is a matter of impossibility for Europeans to ascertain the actual prices of things sold in the bazaar, these never remaining exactly similar for two days together, it may be imagined that the daily statement of purchases opens out a wide field for enterprise on the part of the butler, of which he is not slow to take the fullest advantage.

The marketings cannot be undertaken without the aid of the coolie, as the labour of carrying a basket of provisions would be far beneath the dignity of any other servant in the house. The cook has a mate, be the household ever so small, and, as Europeans have a habit of objecting to such a trifling annoyance as dust, it is necessary to employ a halal, a gentleman whose chief duty would appear to be, if he may be judged by his actions, to flick the dust from one part of the room to the other, to mix up the papers on one’s desk in inextricable confusion, and after removing certain books from their places, to carefully replace them, bottom uppermost. The massalchi also has his arduous duties, which chiefly consist of over filling the lamps with oil, and arranging the wicks in such a manner that they shall smoke with the least amount of provocation in the worst possible manner.
The work of the bearer, or dressing boy, is to layout your clothes in the morning, to put the studs in your shirt, and leave the mark of his finger duly impressed upon the front thereof. He waits upon you at table, and considers that this and the task previously detailed constitutes a day’s labour sufficiently arduous for anyone man.
The syce, or groom, is still a necessity in most bungalows, despite the advent of the bicycle, and this individual usually shares with the butler the honour of being a source of torment to his employer. In the accompanying illustration he is shown on the right of the group, the massalchi coming next to him. The centre figure is the cook, a Goanese, as is also the dressing-boy in his rear-beside him being the hamal, the butler completing the list.