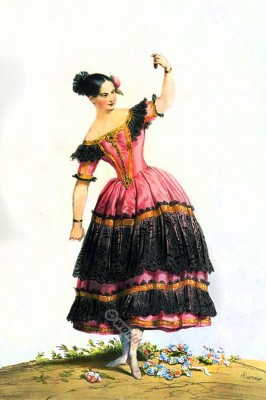 In the ballet, “the limping devil” by Casimir Gide.

Fanny Elssler actually Franziska Elssler (born 1810 in Vienna, died 1884) was one of the most famous dancers of the 19th Century. With national dances such as polkas, Krakowiak and her famous Cachucha she conquered the world’s stages.

Johann Strauss and Hans Adler created in her honor, the operetta, “The dancer Fanny Elssler”. First performed on 22 December 1934 in Berlin.

The Cachucha is an Andalusian solo dance. He is originally from the province of Cádiz and is performed by both women and men. The dance is usually accompanied by rhythmic beating of the castanets and stomping of heels, similar to the bolero.