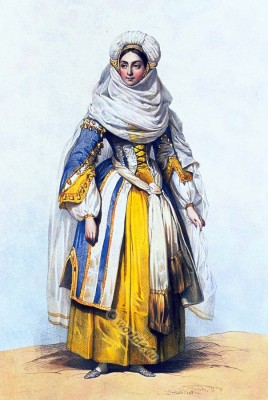 Cornélie Falcon as Rachel in the opera la Juive.

Cornélie Falcon as Rachel in the opera la Juive.

Cornélie Falcon (1814–1897) was a famous French soprano who sang at the Opéra in Paris. In the picture it shows the Rachel in the opera La Juive, by Jacques Fromental Halévy. La Juive is considered the most important work of J. F. Halévy. The plot of the opera is set in Constance at the time of the Council of Constance of 1414. The political events of this turbulent time determine the fate of the characters. The focus is on the Jewish goldsmith Eleazar and his daughter Rachel. The story was as a memorial to the conflict between Christianity and Judaism. Estimated by Giuseppe Verdi as well as by Richard Wagner. During the period of National Socialism, in which the composer was ostracized as a Jew, she disappeared from the game plan. Today, the opera La Juive is rarely included in the repertoire. Cornélie Falcon is buried at the Pere Lachaise cemetery in Paris.