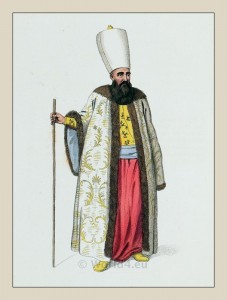 Officers of the Sultan’s guard in official attire.

IN Plate Ill, there is given a representation of two Capidji Bachis in their dress of ceremony. The present plate shows one of the same officers in his common dress. They are the private officers of the Sultan, and enjoy very advantageous and lucrative situations. They are sometimes raised to the dignity of a Pacha with two tails. The Capidja Bachi must be distinguished from the Capidji, the latter being only common porters, who attend at the exterior gates of the palace.