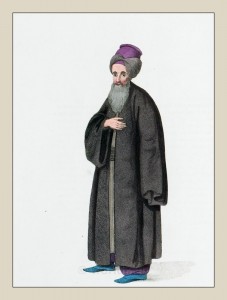 IN no country does that persecuted race enjoy more privilegs than it does at Constantinople. The Jews are put upon the same footing with Turks; and even in some instances have greater liberty. They profess their own religion, and are judged by their own laws, unless they appeal to the law of the country. They consequently possess a great degree of respectability and great riches, because a very considerable part of the trade passes through their hands, most of the rich merchants being Jews.

Almost the whole management also of the affairs of the rich indolent Turks is entrusted to some person of this tribe; and every thing is transacted by them. Externally, indeed, they do not appear, probably through fear, with much magnificence; but great pomp and luxury are to be seen in their houses. Such is the account given by Dallaway in his travels. But a late French writer, Citizen G. A. Olivier, in speaking of the Jews, say, “They present themselves under far more unfavourable colours than in Europe. More ignorant, more poor, more fanatic, they give themselves up to even the lowest sort of trade.” The abuse, however, which he loads them with, is rather unfavourable to his justice as an historian.