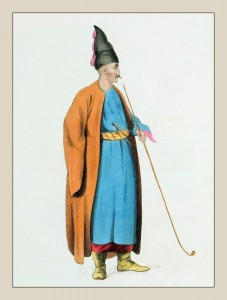 An Albanian, Shqiperia during the Ottoman Empire in 1800.

THE immense extent of the Turkish empire, from the coast of the Gulf of Venice on the west to the end of the Black Sea on the east, from Russia and Poland on the north to the Mediterranean on the south, contains a great variety of national characters. The present plate represents an Albanian, who inhabits one of the most western parts of the Turkish dominions, with his yellow boots, his golden girdle, and his pipe, which, as he stands, reaches to the ground.