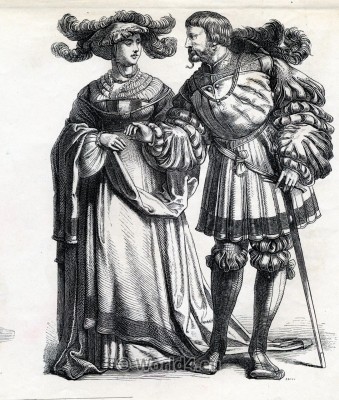 The man and the woman wear a large beret adorned with lush feathers. The jerkin is belted. The clothes were slotted rich. Including mostly different colored shirts or skirts were worn by the slots differently colored bulging through. Accordingly, colorful was the appearance. He wears the typical of that cow foot shoes that had developed from the pointed shoes of the Gothic in this form.
The woman has always been shrouded in a lot of material and was based in the fashion according to the man’s. The emphasis was on both genders in the sweeping shoulders.