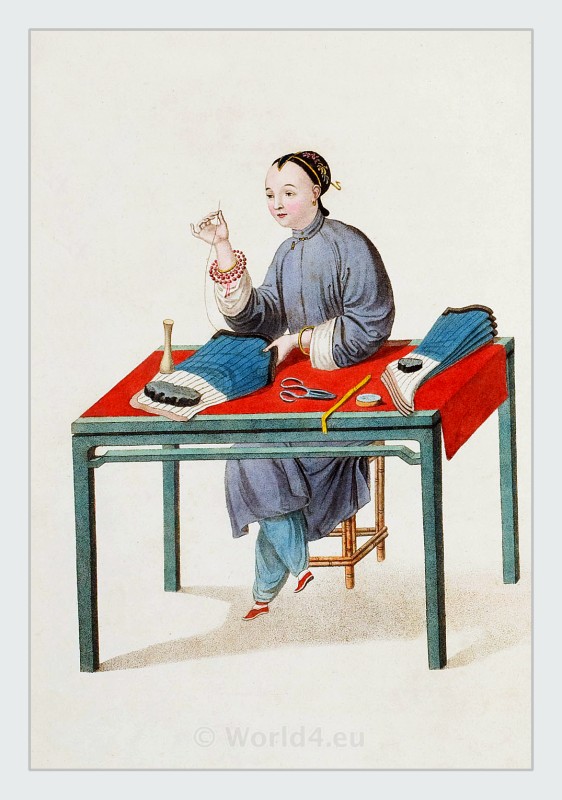 THE men’s stockings are made of stuff, stitched and lined with cotton, with a line of gold thread fewer along the top. There stockings are somewhat misshapen, but are very warm. There is an engaging modesty in the Chinese habit which adorns every class in life. The dress of the women is fastened close round the throat, their sleeves conceal their hands, and they wear long drawers reaching to their ankles. Those who can afford it purchase ear-rings of gold, and large armlets of the same metal.

The hair of the Chinese is universally black. The women comb it up very nicely and braid or coil it on the head with much neatness; sometimes it is fastened with a gold bodkin or two, and generally ornamented with natural or artificial flowers, disposed according to the fancy the wearer. The young and unmarried are required by custom to wear their hair combed over their foreheads, whilst the eyebrows of both are trimmed into a mere pencil line.

None but the lowest orders of Chinese women are indulged with the natural use of their feet. The parents of a female infant of superior condition do not neglect to roll the toes under the feet, the great one excepted; and by being confined thus, they are rendered incapable of ever recovering their natural shape and position. The motive for this singular distortion is not acknowledged by any of the natives, neither is it easy to be surmised. If the custom proceeded from a notion of rendering the women more usefully domestic, the purpose is in a great measure defeated, since they are by this practice deprived of that active power which is necessary for the performance of domesiic duties. If it be from a distrust of their fidelity, it is remarkable that no such custom prevails amongst the Turks, or other Asiatics, who are equally jealous of their women. It seems probable that, either from habit or prejudice, they attach ideas of vulgarity and disgust to this part of the human frame.

The Chinese ladies are ridiculed by the European nations on account of this deformity, which is the result of fashion only, whilst they do not consider that, unsightly it may be, it is perfectly consistent with those peculiar principles of modesty and decorum which the Chinese process.

Source: Chinese people at their occupations and applying their crafts. The Costume of China by George Henry Mason published by W. Miller, Old Bond Street, London May 4,1799.