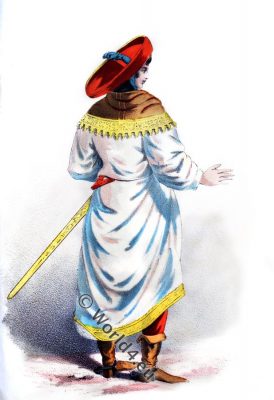 He wears a red hat, held in its place by a greenish ribbon, passing under the chin. The collar and the hood are yellow, bordered in part with gold. The coat is white, changing to a bluish tint, and is terminated by a border of gold. The stockings are red; the boots of a yellowish color, and the spurs are silver. The sword-belt is red, with gold buttons. The case of the sword is white, with gilded ornaments.

The Italian costumes furnish few examples of the use of boots; but the monuments of the northern nations prove that the French, the Germans, and the English very generally availed themselves of this mode of protecting the feet and legs; compelled, doubtless, by the necessities of a cold and moist climate.