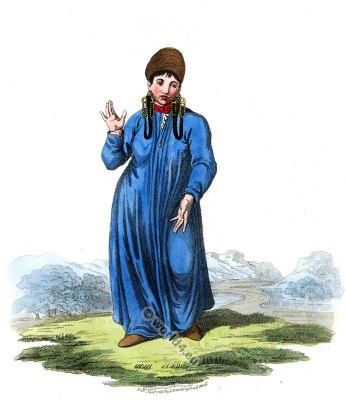 A Female Tartar of Tomsk.

A Female Tartar of Tomsk.

THE Tartars of Tomski are distinct from the tribe which occupies the environs of the town of Tomsk; for the latter, as well as the Tartars of Tobolsk and Tarn, are a Boukarian colony.  The Tartars of Tomski, properly so called, inhabit the two sides of the Toni, and the neighbourhood of several small rivers which run into it: their establishments extend from the mountains of Kousnetz, above and below the town of Tomsk, to the mouth of the Tom, on the right bank of the Ob. These Tartars are divided into four volosts, of which Tschatzki is the most considerable. They observe the same religious ceremonies, follow the same mode of life, and dress in the same manner as the Tartars of Kazan; excepting the difference which their poverty necessarily introduces. The women wear a small cap, generally made of rich stuff, and over it a flat bonnet trimmed with fur. The neck of the chemise is richly embroidered in various colours, and strings of glass pearls are worn instead of ear-rings.
The Tartars of Tomski are not much attached to agriculture. The chase is their favourite exercise, and this they pursue to considerable advantage on the mountains in the district of Kousnetz. Their poverty generally prevents them from buying or maintaining more than one wife. The prettiest female never costs her husband more than fifty rubles. Professor Muller being pre-sent at a wedding in the volost of Tschatzki, found the ceremonies similar to those practised by the Tartars of Kazan. The bride, who was twenty years of age, not pretty, but of a good complexion, cost only a horse and a holiday dress for her mother.
This people usually bury their dead in the neighbourhood of some forest. They raise wooden huts over the graves of their relatives. The traveller who beholds one of these burying-grounds at a distance, bends his steps towards it, with the expectation of reaching some village: he flatters himself with the hope of being shortly restored to the society of the living, and sadness seizes his soul when he discovers himself surrounded by sepulchres of the dead.
The Tartars of the Ob, and of Tobolsk, as well as the Touralines, appear to have the same origin as those of Tomski.