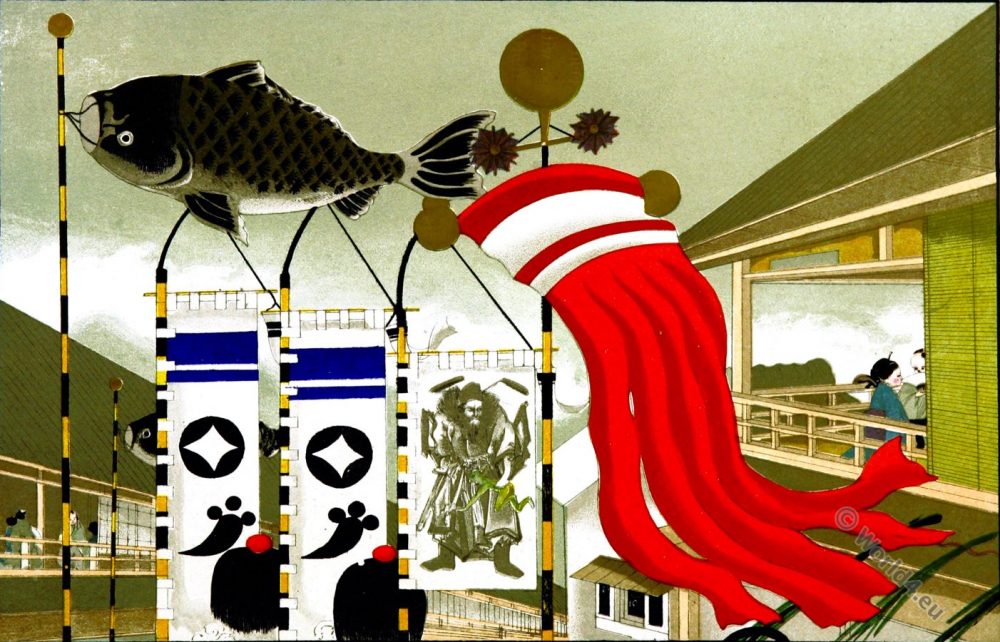 Festival in honour of the birth of child.

The first feature of Japanese life that prominently presents itself to the notice of the stranger, is the number of festivals and holidays held in honor of the various deities, warriors, and sages, or in accordance with some ancient custom of the country, which is as paramount an authority as the most stringent of its laws.

Of these festivals, the ‘Oki-don-tako,’ or ‘Great Holiday,’ which takes place about Christmas, and lasts a fortnight, is the most important. Previous to its celebration, it is customary with the people to settle accounts, and amicably adjust any quarrels or estrangements that may happen to exist; and they evince the same spirit that actuates Christian nations at this season, by a general interchange of presents and complimentary visits with their friends and acquaintance. So anxious are the merchants to take this opportunity of settling with their creditors, that, when the dealers have deficiencies to make up,articles are frequently pressed on foreign residents at the Treaty Ports at prices previously refused.

The ‘Gogats Seku,’ the emblems of which form the first subject of illustration, is also a festival of great importance: it takes place about the middle of June, which is the fifth month of the Japanese calendar, from which it derives its designation, and is kept up with more than ordinary spirit during the three days of its continuance. It is held in commemoration of Gongen Sama (1), the great general to whom the present dynasty owes its existence; and the Japanese date their births from this festival, even if born the day after its last celebration.

It has several curious symbols, the most striking being huge aerial fishes, in imitation of the ‘koi’ or ‘carp;’ large ‘crimson streamers’, representations of Gongen Sama crushing a demon; and the heads and tails of crayfish, with which they decorate their dishes and the entrances of their houses. The floating fish flag is hoisted over every house in which a boy has been born during the preceding twelve months, and is emblematical of his future career. As the ‘koi,’ or ‘carp,’ which is very plentiful in Japan, finds its way up streams and rivers, surmounting aU obstacles in its way, and rendering itself by its fecundity and edible qualities useful to the whole country, so the child is to make his way through life, boldly fulfilling his destiny, and proving himself a useful and beneficial member of the community. In the same way, the scarlet streamer indicates the birth of a female child, and the domestic nature of her duties.

The crayfish are used to remind the people of their humble origin (it being traditionary that the empire originated from a race of poor fishermen), and the consequent necessity of humility, temperance, and frugality, in their different stations in life.*

Various qualities are ascribed to the hero of this festival: he is considered the especial champion of women, for whose protection he instituted several laws and regulations; among others, making it obligatory on them to blacken their teeth on entering into the married state. He is believed to be able to charm away fevers, to alleviate suffering, and to prevent the lives of his protégées from being embittered by jealousy. During the celebration of this festival the whole country presents an extraordinary appearance; aerial fishes, streamers, and bamboo decorations, meet the eye in every direction; and the people in gala costume, which is always worn on holidays, greatly enhance the brilliancy of the scene.

The gala dress is much gayer than that ordinarily worn, but there is little difference in the material, the dress of every class being regulated by stringent sumptuary laws. Blues and purples predominate in winter, the fighter and more varied colours being generally confined to materials only adapted for summer use.

The ladies have a great partiality for crimson crape, which is generally worn as an under-robe, and peeps daintily out at the bottom of the dress, and at the wide open sleeves; it is also entwined in the hair, and with the girdle, at the back of which it is allowed to droop in full, graceful folds.

The men do not affect such bright colours as the women and children, although their robes are often fantastically embroidered with various strange devices, such as shell-fish, frogs, flowers, and landscapes, some of which are beautifully worked.

The whole populace on these occasions seem determined to enjoy themselves; the air of good-natured contentment, which characterises them at all times, taking a more exuberant tone as they stroll about the streets, visit in family parties, or make excursions to the neighboring tea-houses.

Thoroughly domestic in then tastes and habits, it is a pleasing sight to watch the family groups. Here a grand-dame is carefully assisted along by her son and daughter-in-law, preceded by chattering grandchildren in the gayest of dresses, tugging at extraordinary kites, or a father, in the doorway of his house, nurses one child, while the mother exhibits for the admiration of sympathizing friends another infant — probably one of the unconscious objects of all this rejoicing

Though the men frequently exceed the bounds of sobriety on these festivals and holidays, they rarely become quarrelsome. It is, however, by no means unusual for them to keep in a state of intoxication for days; alleging this, with perfect sangfroid,as an excuse for any neglected promise or unfinished job. 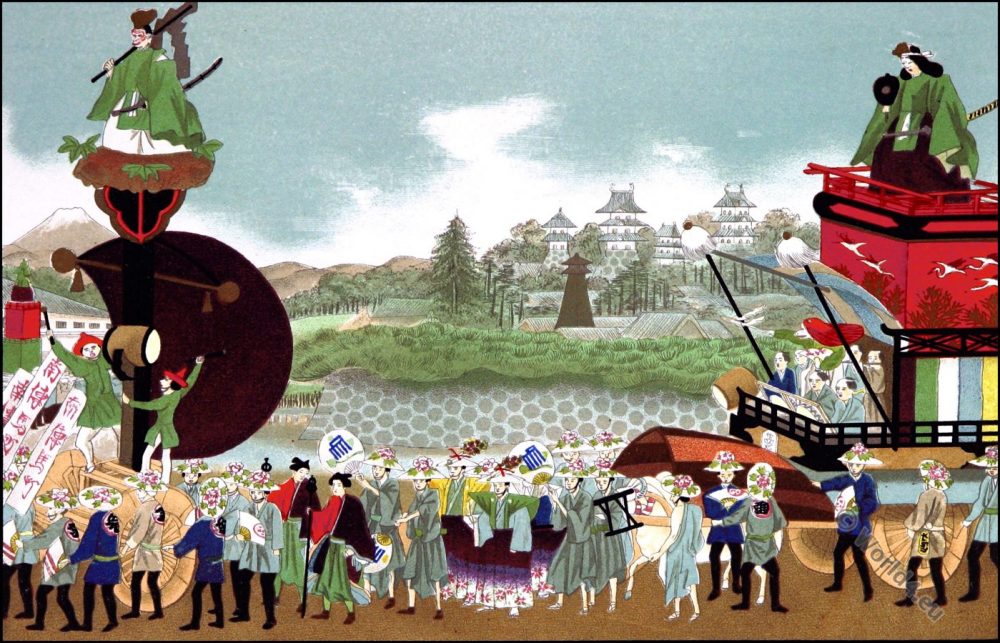 The ‘Omatsurie,’ or ‘Merchants’ Great Festival,’ which is only celebrated in the principal towns, takes place about the middle of July, and may be considered to be an exhibition of the different trades, as the merchants and craftsmen of the country show the choicest specimens of their wares and handicraft in a kind of trades’ procession.

Like all the rest of their festivals it has a religious signification, the people believing that misfortunes in business are warded off by it. Upwards of five hundred trade trophies figure in one of these processions, the imposing nature of which may be imagined from the gorgeous materials and fantastic dresses depicted in the illustration. 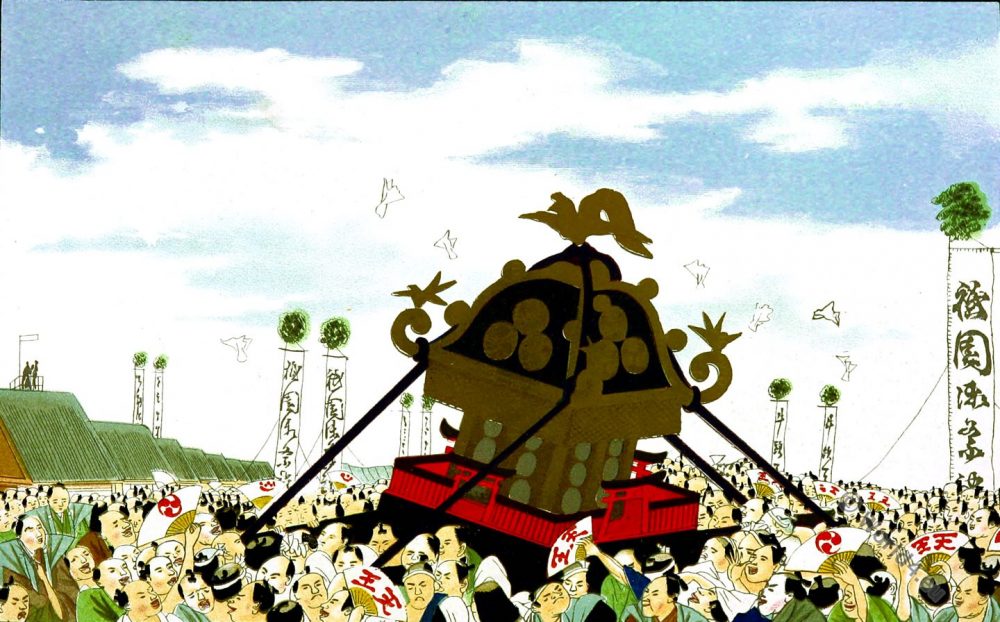 The car in the foreground bears the trophy of the wax-figure makers, whose trade is one of the most lucrative in Japan, as the Japanese not only perpetuate their celebrities by wax-work effigies, but the majority of the people, being professors of the Shinto religion, have Lares and Penates of the same material, called ‘Kamis,’ which are supposed to intercede on their behalf with the Supreme Being. And this is in addition to regular wax-work exhibitions, which are very popular, and the sale of toys which are hawked about the country by travelling dealers.

The merchants have a general right of entrée to all parts of the town on these occasions. In the illustration, the procession is passing through the official quarter of Yeddo, the Tycoon’s palace forming the subject of the background. They halt from time to time in their progress, which is enlivened by songs descriptive of their various callings, and the beating of huge drums, and blowing of strange discordant instruments. There is a kind of analogy between our industrial exhibitions and these festivals ; and, whatever the purpose may be for which they were originated, it is plain that they admirably represent the industry, wealth, and resources of the country.

‘Otinta Sama’ is a comical divinity, who is laughed at by some, and believed by others to inhabit certain miniature temples, which are crowned with cocks with outspread wings,as that bird is supposed to be his favourite incarnation. On holidays and festivals, his temples are frequently carried about on the shoulders of his votaries, who are generally the most ignorant and superstitious of the people. This is always a subject of merriment with the unbelievers, who crowd round the temples and oppose their progress, and indulge in witticisms at the expense of the divinity and his bearers. This sometimes leads to a disturbance, but only when the parties concerned have been indulging too freely in their favourite saki.

The intercession of Otinta Sama is principally sought in times of drought or of heavy rains; the temple in the one case being brought out and exposed to the sun, and in the other sprinkled with water, by way of intimating the immediate necessity for his good offices.

* The slice of salt-fish which accompanies Japanese letters is an exhortation effect.

(1)Tokugawa Ieyasu (jap. 徳川家康; * 31st January, 1543 in Okazaki Castle, † June 1, 1616 in Sumpu (now Shizuoka)) was the founder of the Tokugawa Shogunate in Japan and is named after Oda Nobunaga and Toyotomi Hideyoshi as Third of the Three Kingdoms of feudal Japan.

‘Sketches of Japanese Manners and Customs’ were collected during the years 1864-5, by Jacob Mortimer Wier Silver. Lieutnant Royal Marines, light Infantry  (Late of the Royal Marine Battalion for service in Japan.). Illustrated by native drawings. Reproduced in fac-simile by means of chromo-lithography. Printed by Day and Son, limited, Lithographers and Publishers. London 1867.