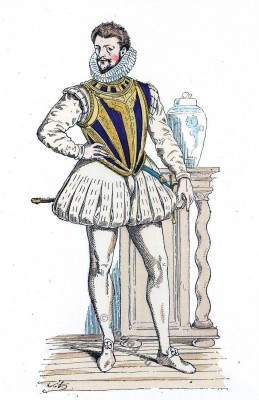 Henri de Guise, (1550-1588), also called Le Balafré, was the eldest son of François de Guise and Anna d’Este and succeeded his father after his death as duc de Guise. 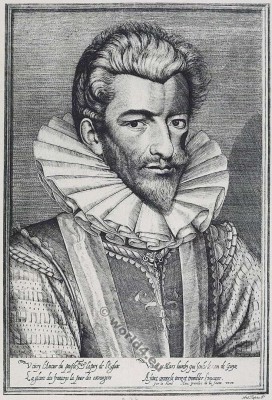 Henri de Lorraine, Du de Guise. From an Engraving by Le Blond, in the British Museum. 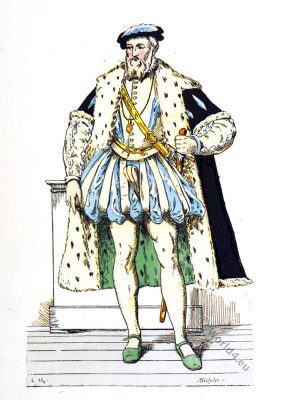 Henri de Lorraine, duc de Guise commenced the Massacre of Bartholomew by the assassination of admiral Coligny [Co-leen’-e]. Being forbidden to enter Paris by order of Henri III., he disobeyed the injunction, and was murdered. Henri de Guise has furnished the subject of several tragedies. In English “Guise or the Massacre of France”, by John Webster (1620); The Duke of Guise, by Dryden and Lee. In French “Hints de Blois” (the Death of Guise), by Francois Raynouard, 1814.) 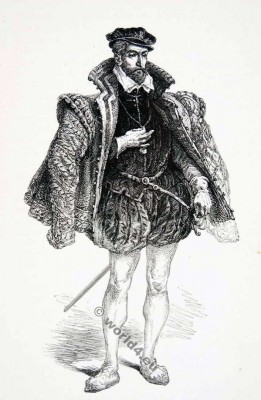 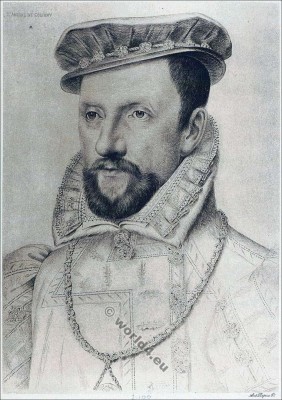 François due d’Alençon, fourth son of Henry II., tried every artifice to gain a throne; intriguing first for the petty kingdom of Navarre, then for the throne of France, and then for England. He was, at last, invited to become prince of Flanders, when that country was threatened by the Spaniards. As soon as this appointment was made, Spain summoned the Guises to their aid, and Henri de Guise sent Salcède, a Spaniard, to assassinate him; but the project failed, and Salcède [Sal-sade] was tora to pieces by four wild horses.

Henri of Guise became daily more and more popular, as the king, by his indecent conduct, voluptuous frivolity, disregard of truth, and lavish gifts upon his favorites, became more and more contemptible.
The Parisians could not help comparing their idolized duke, the most puissant, manly, chivalrous man of Europe, with the paltry minion placed upon the throne.

At length, the jealousy of the king was effectually aroused. He became alarmed at the duke’s popularity, and foolishly forbade him to set foot within the capital. The duke demanded the reason of this prohibition; and went to Paris under color of clearing himself, and rebutting any charges which might be preferred against him. He was received by the people with acclammations; and welcomed with apparent cordiality by Catherine, who undertook to mediate between him and her royal son. Henri III. consented to receive him, and reproved him sharply for forcing himself into the city. The duke replied with all apparent submission; and was suffered to leave the presence-chamber unharmed.
In the mean time, the king sent for his Swiss-guards, about 800 in number, who were introduced secretly into the city at midnight. 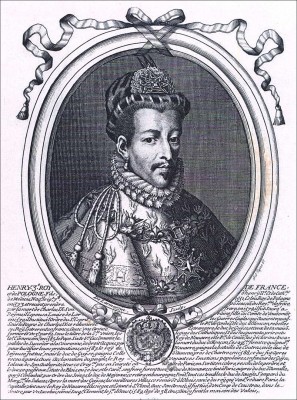 The sight of these mercenaries, parading the street next morning, rendered the people furious: The pavement was torn up; immense chains were drawn across the streets; and barricades* were formed of barrels filled with sand and stones, behind which the citizens lay in ambush, armed with arquebuses, pistols, swords, daggers, and pikes.

* The French for barrels is barriquest and from these “barriques,” filled with sand, the term “barricade” is derived. 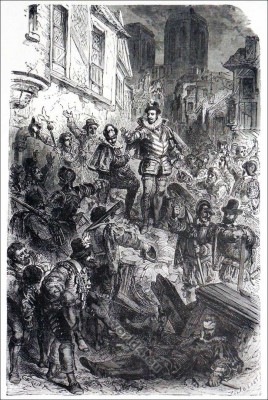 The bottom windows of all the houses in the city were closed; but at every other window stood some-one with musketoon, arquebus, or paving stones, to aim at the royal guards as they passed by.
The Swiss, blocked in on all sides, were shot down without the power of resistance or self-defence; and would have been wholly exterminated, if the duke himself had not interfered to prevent the massacre.

Mounted on his charger, with his riding-whip in his hand, he issued from his hotel. The crowd received him with frantic enthusiasm, for the “people were mad after him.” Penetrating to the places where the unfortunate guards were posted, he stopped the firing; put an end to the riot; and suffered the guards to leave the city without further molestation.
In the mean time, the foolish king fled to Chartres [Shart’r], leaving his rival master of Paris. Some days now elapsed, during which the queen-mother acted as mediator, and again patched up an apparent reconciliation between the king and the duke.

Epernon, the obnoxious favorite, was stripped of his honors and banished; Guise was created generalissimo of the royal forces, grandmaster of the household, and lieutenant-general of France; and the States-general was summoned to meet at Blois [Blwor], to deliberate on the grievances of the nation.
All variance seemed to be adjusted. The king received the duke with every indication of friendship; and even swore at the altar to love him, honor him, and protect him.
Seven months passed by from the famous day of the barricades; the king’s jealousy revived; and he resolved, at length, to cut off his rival by private assassination.
The duke received several warnings of this intention, but positively refused to withdraw from the threatened danger, under the full conviction that the king would not dare to molest him.
On the 28rd of December, a council was summoned to the banquet-hall of the castle at break of day; and the king requested the duke to be present, as “affairs of great moment were about to be brought forward.”

Between the banquet-hall and a small side-room used by the king as his private chamber, was a long corridor, where the king posted nine of his 45 guardsmen, armed with daggers.
The duke entered the council-room, and was told that the king wished to speak with him in his private closet, before the business of the day began. Lifting up the arras, he entered the corridor to obey the summons, when the assassins fell upon him and murdered him.

The treacherous monarch heard him fall, and, rushing from his closet, set his foot upon the bleeding neck of his rival, exclaiming as he did so, “Venomous beast, thou shalt no more spit forth thy pernicious poison!”

The cardinal de Guise, who had just entered the banquet-hall, hearing his brother cry for help, ran into the corridor, but was instantly arrested; and next morning, was found dead in the tower of Moulins [Moo-lah’n].
Twelve days afterwards died Catherine de Médicis, the queen-mother. She had reigned for 30 years in the name of her sons, and had committed many a dark deed; but the murder of the duke was contrived and executed, not only without her instigation, but contrary to her express approval.

Source: The political, social, and literary history of France. Brought down to the middle of the year 1874. By the Rev. Dr. Cobham Brewer.