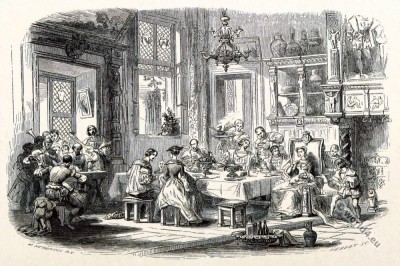 Musicians accompany a dinner party of Margaret of Austria.

Musicians accompany a dinner party of Margaret of Austria.

Margaret of Austria (1480 – 1530) of the House of Habsburg, was one of the great musical patrons of her time. She was Duchess of Savoy and governor of the Habsburg Netherlands. Margaret was the only daughter of Maximilian I from his marriage to Mary of Burgundy. In her youth she received a fine education, played various musical instruments, wrote poetry and had a comprehensive library. In Mechelen, her main residence, Margarete had built a palace where she gathered many artists and scholars around and the court of Mechelen so made to the center of humanism. Among them people such as Cornelius Agrippa, Adrian of Utrecht, Erasmus of Rotterdam, Pierre de la Rue and Josquin Desprez were. Her court had such high regard that foreign nobles gave their daughters in Marguerite’s care to be educated with her.

Note:  Lackey runner XV century. According to a colored print of 1567.