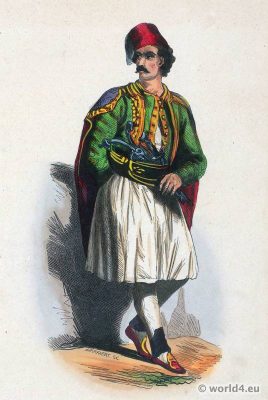 Men from Greece in Fustanella.

Men from Greece in Fustanella.

The Fustanella consists of a shiny white pleated skirt reaching from the waist to the knees, held together by a pull over the hips. After kneeling, it changes into wide wrinkles, which are treated very carefully.
The material is usually made of cotton or linen, the fabric was coarser for the peasants.

The Fustanella is a traditional men’s skirt. As a typical traditional costume, the pleated skirt is worn mainly in Albania and Greece and is known as a garment in the whole of south-eastern Europe.

The word Fustanella comes from the Italian fustagno, which means skirt or cotton flannel. This word was borrowed from the Latin fūstāneum “hard substance”, diminutive of fustis. Other name variations are in the Greek foustani, Romanian and Turkish Fistan. Formerly the garment was also called Albanese shirt.

On the Balkan Peninsula, statues have been on display of Fustanella-style clothing since the 5th century BC. A sculpture of Illyrian origin was found in Maribor. Other historians suspect that the men’s skirt originates from classical Roman toga.

The traditional costume of the Albanians and Aromanians spread throughout Greece during the revolution, among other things, through the Arvanites and Çamen and experienced its heyday as part of the military uniform and as a contemporary fashion for men in the 19th century.