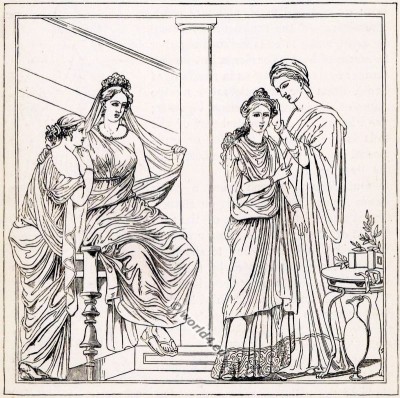 Toilet of the Bride

Toilet of the Bride in ancient Rome.

A Roman Bride rightly made for her wedding. In the presence of her friends and mother. On the table are make-up and fragrance oils. Cosmetics played a major role in the public appearance of woman and man.
The red for coloring the lips and cheeks was obtained from ocher, from a lichen-like plant called ficus or mollusks. The eyes were edged with soot or powder of antimony, thus the shape of the eyebrows has been underlined. The women wear the tunica which was tied under the breasts. The second woman from the left wears a palla, a cloth which was worn over the head and shoulders and extends up to the knees. The hairstyle points to the first century. The woman standing on the far right wearing a stole with wide sleeves.